Memorial services for Marvin James Christenson of Albert Lea will be at 1 p.m. Thursday at St John’s Lutheran Community chapel in Albert Lea. The Rev. Don Malinsky will officiate. Friends may greet the family one hour prior to the service at the chapel. Interment will be in Graceland Cemetery. 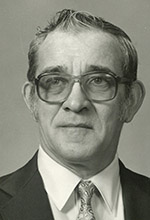 Marvin was born Oct. 10, 1929, in Albert Lea, the son of Jens and Alma (Jepson) Christenson. He attended Albert Lea public schools. He was united in marriage to Jeanne Ann Zerck on March 20, 1978, in Sioux Falls, South Dakota. Marvin was a resident of Albert Lea all of his life and had been employed by the Albert Lea Foundry for 20 years and at Albert Lea Tire Warehouse for 20 years.

Marvin had been an active member of the Eagles Club and was a past president. He enjoyed fishing, woodworking, gardening, camping and watching John Wayne movies. Together, with his wife, he wintered for many years in Arizona.

He was preceded in death by his parents; brothers Adrian and Don; and son, Jimmy.