Peggy was born Feb. 14, 1935, in Lahore, Pakistan, formerly India, to Arthur and Gwendollyn (Coxhead) Sullivan. She attended school in Pakistan and moved to England with her family, where she completed her education. Peggy moved to the United States and lived in Albert Lea, where she was employed at the Holiday Inn. 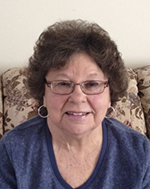 In 1986, Peggy married James R. Finholdt and they moved to Austin, where Peggy worked at Austin Medical Center. She liked to read and watch old movies. She especially enjoyed spending time with her grandchildren and great-grandchildren.

She was preceded in death by her parents; son, Eugene “Buzz” Hanson; and brothers John Sullivan and Peter Wakeford.