Funeral services for Ralph Olson will be at 11 a.m. Monday, May 22, 2017, at Our Saviors Lutheran Church in Albert Lea. The Rev. James Kassera will officiate. Visitation will be from 4 to 7 p.m. Sunday at Bonnerup Funeral Service and one hour prior to the service at the church. Interment will be in the South Shell Rock Cemetery in rural Northwood. 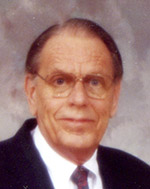 Ralph Irving Olson was born Feb. 8, 1934, at Naeve Hospital in Albert Lea to Truman E. and Marie K. Olson. He was baptized and confirmed at First Lutheran Church in Albert Lea. He attended elementary school at Northside School kindergarten through third grade; Abbott School from fourth to sixth grade; Central Junior High seventh to ninth grade; and before graduating from Albert Lea High School in 1952.

Ralph was an active member of Our Savior’s Evangelical Lutheran Church in Albert Lea, where he taught Sunday school, led the Luther League and served in several offices including trustee, deacon, treasurer and president. He represented the congregation at conventions of the Evangelical Lutheran Synod and served on the synod’s Board of Trustees.

In October 1953, he began what would be a 45-year career at Interstate Power Company. He was had several positions of increasing responsibility over the years including superintendent of natural gas operations for the Albert Lea District, Assistant District Manager and was named District Manager in 1993. In 1996, Interstate merged with two other utilities to form Alliant Energy. In the newly formed company, Ralph held the position of director of customer service until his retirement in 1998.

Ralph was proud of the community he called home all his life, and was active in the Albert Lea Jaycees, Toastmasters Club, Lions Club and the Junior Achievement organization. He served in many board positions, including Chamber of Commerce, Freeborn County Historical Society, Greater Jobs Inc., Norwest Bank (now Wells Fargo), Naeve Healthcare Association, Mayo Clinic Health System and the Education Foundation of Albert Lea.

Ralph and Marilyn enjoyed travelling together and made three trips to visit the homeland of their ancestors in Norway, Denmark, Germany and Holland. They researched and published family genealogies dating back to the 1500s in some cases.

Ralph is survived by his wife and daughters; grandchildren Cori (Jason) Boxrud, Matthew and Daniel Allen, and Joel Hermanson; several brothers-in-law and sisters-in-law; and nieces and nephews.

Thanks be to his Lord and Savior, Jesus Christ, for the many blessings in Ralph’s life and for the promise of his eternal life in heaven.