Sharon “Sherry” K. Staloch, 76, of Wells passed away peacefully Wednesday, May 3, 2017, at her daughter’s home in Lakeville, surrounded by her children. A Mass of Christian burial will be at 10:30 a.m. Monday at St. Casimir Catholic Church in Wells. The Revs. Eugene Stenzel and Andrew Vogel will officiate. Visitation will be from 3 to 6 p.m. Sunday at Bruss-Heitner Funeral Home in Wells, and will continue one hour prior to the service at the church. Burial will take place at St. Casimir Cemetery in Wells. Bruss-Heitner Funeral Home in Wells is assisting the family.

Sherry was born July 21, 1940, in Albert Lea to Leonard and Ardella (Buschow) Dinneen. Her childhood was spent in Matawan enjoying her siblings, cousins and friends. A favorite memory was having apples thrown at her by Bob Staloch when they were young. Sherry was a proud graduate of the Freeborn High School class of 1957. After attending Minnesota School of Business in Minneapolis, Sherry worked in Mankato. 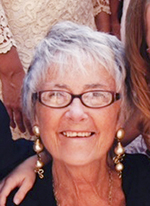 On Oct. 5, 1963, Sherry married Bob Staloch at St. Joseph’s Catholic Church in Waldorf. They made their home on the Staloch farm, where they lovingly raised their four children. Bob and Sherry were members of St. Casimir’s Catholic Church and she enjoyed many years of working at Meryl’s Style Shop in downtown Wells. Sherry was a lifetime fan of her children and adored their spouses and her grandchildren.

Sherry had a beaming smile and a magical way of making others feel special by listening to them and laughing with them. She will be fondly remembered as a kind neighbor, a supportive mother, a valued friend, a loving grandmother and a caring aunt. Sherry loved fashion, friends, her faith and her family. Two of Sherry’s favorite things were being Irish and spending time with her grandchildren. Sherry was an inspiration to others and easy to love.

Sherry was preceded in death by her husband, Bob; parents Len and Ardella Dinneen; and father- and mother-in-law Paul and Selma Staloch.

To leave an online condolence, visit www.brussheitner.com or Sherry’s Caring Bridge site. If purchasing flowers, the family preference is for flowers through Accents in Alden, 507-874-3425.