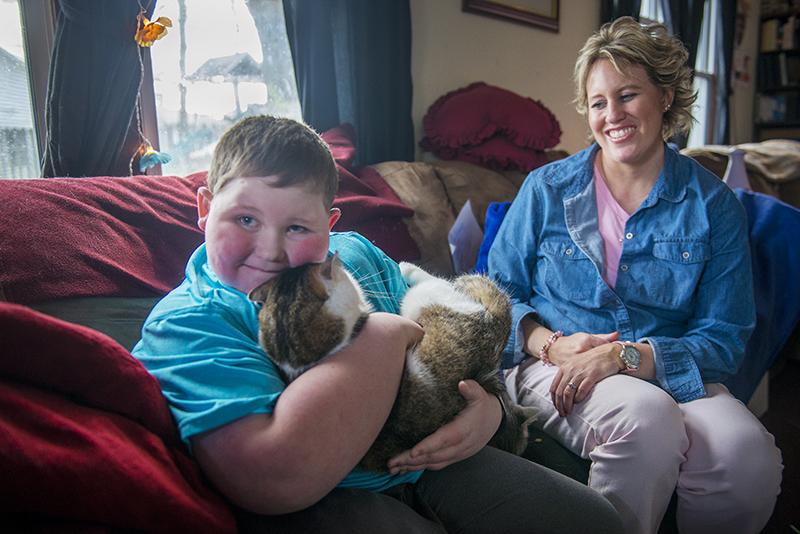 Christian Reichl holds his cat Buttercup while sitting next to his mother, Lisa. A benefit will take place this weekend in the 11-year-old’s honor to help offset medical costs from his battle with brain tumors. - Colleen Harrison/Albert Lea Tribune

Christian Reichl is your typical 11-year-old. This is evident as he sits on a couch at home, playing games on his tablet while cartoons play on the TV, stopping from time to time to pet either Buttercup or Precious — the family cats.

Reichl’s life up to 11 has been anything but typical, though.

His mother, Lisa, knew there was something off when her son didn’t speak a word until he was 3 years old. He was tested for possible signs of Asperger’s or other forms of autism, but nothing seemed to fit.

When Reichl was 4, he starting having headaches so extreme they induced vomiting. His pediatrician assumed he was having migraines, but ordered a CAT scan once they noticed something while looking in one of Reichl’s eyes.

That something turned out to be a brain tumor, or more specifically, craniopharyngioma. Craniopharyngioma is a type of brain tumor that is either located close to or entwined with the pituitary gland and its surrounding tissue. Reichl’s parents were told the brain tumor had been with their son since birth or from early on in his infancy.

For Reichl’s mother, while the news was anything but welcome, it did finally answer some questions.

Christian Reichl underwent surgery to remove the tumor along with other treatments, but a second tumor came along almost exactly two years after the first one was discovered. That news was almost more devastating to his mother, as she knew the damage and strain the first tumor had caused her son. 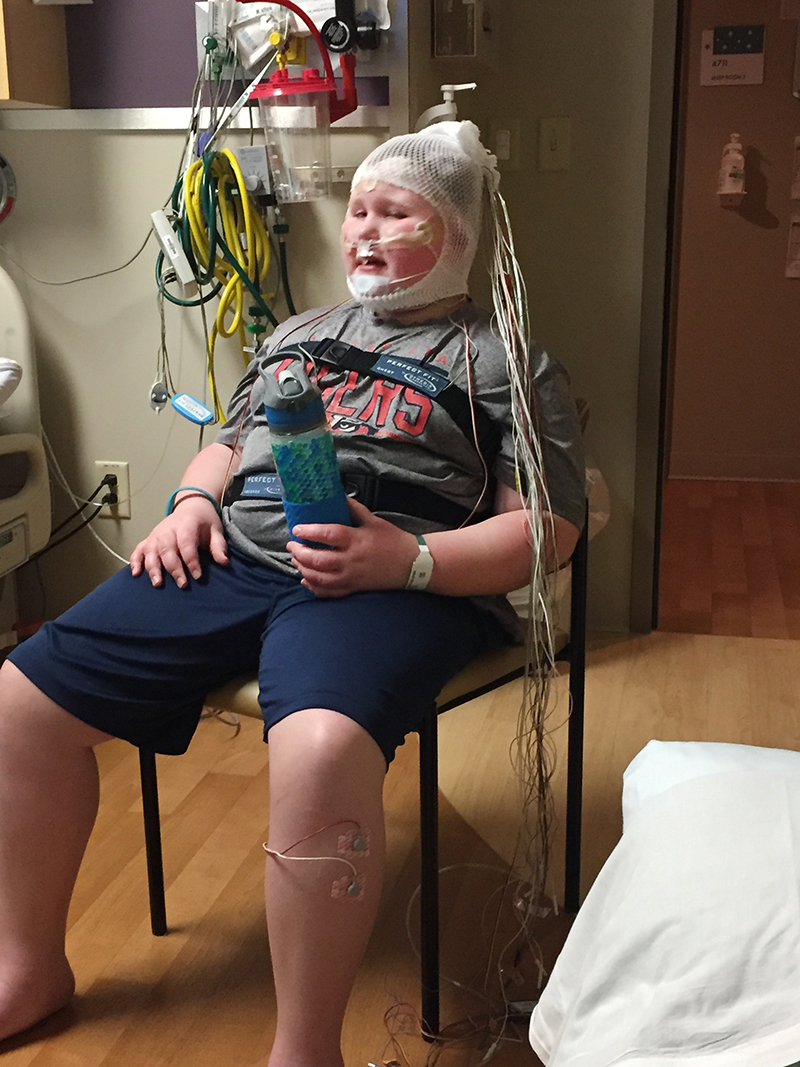 Due to the location of the brain tumors, Reichl’s hypothalamus — an area of the brain that controls things like body temperature, hunger, thirst and sleep, among others — had been damaged. Reichl got little to no sleep because of the tumors, and to this day his parents have to keep food locked up in the house and regulate what he eats, as he feels hungry constantly.

Reichl’s second tumor was surgically removed as well, but this time he went to Chicago afterward to receive proton radiation treatment in attempts to prevent any more tumors and to eliminate any remaining harmful cells.

Lisa Reichl said while her son has never had cancer, as both tumors were found to be benign, he has had just about every treatment a cancer patient would receive — and in certain instances more — aside from chemotherapy.

For about the last five years he has been tumor-free, but side effects still remain. He will be on medication for the rest of his life and will need to go in for routine MRIs.

Along with his constant hunger, doctors have advised against Reichl ever playing any contact sports or participating in anything that could result in a head impact. Reichl has struggled with his weight, so his parents pursued finding him a personal trainer. A trainer from Snap Fitness works with Reichl now, making an exception with how young Reichl is.

Reichl still has little to no short-term memory. His mother said he is eligible to take part in the Make-A-Wish Foundation — a program that arranges experiences described as “wishes” to children with life-threatening medical conditions — but she wants to wait until her son can remember the experience.

A fifth-grader at Hawthorne Elementary School, Reichl has missed his share of school days — 26 days last school year and even more than that this year — but his mother said the school has worked with the family to keep him on track to finish elementary school with his classmates in a few weeks.

While Reichl has endured the seven-year journey that got him to this point, his parents Lisa and Derek have been with him every step of the way. The family has had its struggles, though.

Lisa Reichl said it has been hard to find support for her son, as the condition is so rare in general, but especially in children. She and her husband have both balanced being there for their only child while working — Lisa as an online personal shopper for Hy-Vee and Derek in flooring at Floor Tech Inc.

Both Lisa and Derek Reichl have been put through medical and financial strains themselves through the past seven years.

United Methodist Church, a church the Reichls joined in August, has put together a benefit to help offset costs for the family. There will be a benefit concert featuring the Faith Tones starting at 4 p.m. Sunday at United Methodist Church, 702 U.S. Highway 69 in Albert Lea. The first half of the concert will be geared toward children by featuring Disney songs with bubbles, while the second portion of the concert will be more traditional. There will be a dinner following the concert, and donations will be accepted throughout.

If there’s anything the family has taken away from the experience — which happens to coincide with May being Brain Tumor Awareness Month — it’s that they can help others going through something similar by sharing their experiences.

“We’ve been open since day one,” Lisa Reichl said. “God gave us this child with medical issues for a reason. If we can help others with similar situations … just talk about it, if you can. It helps.” 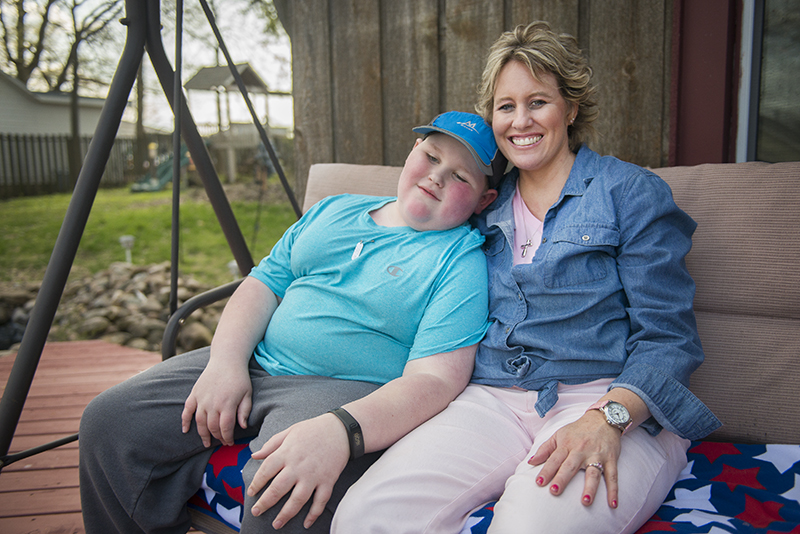 Lisa Reichl said she knew something was going on with her son, Christian, after he didn’t speak until he was 3 years old. She said that when he was diagnosed with a brain tumor at age 4, it was like “the missing puzzle piece was solved.” – Colleen Harrison/Albert Lea Tribune

What: Benefit for Christian Reichl and family

When: Concert starts at 4 p.m. Sunday, with a dinner to follow