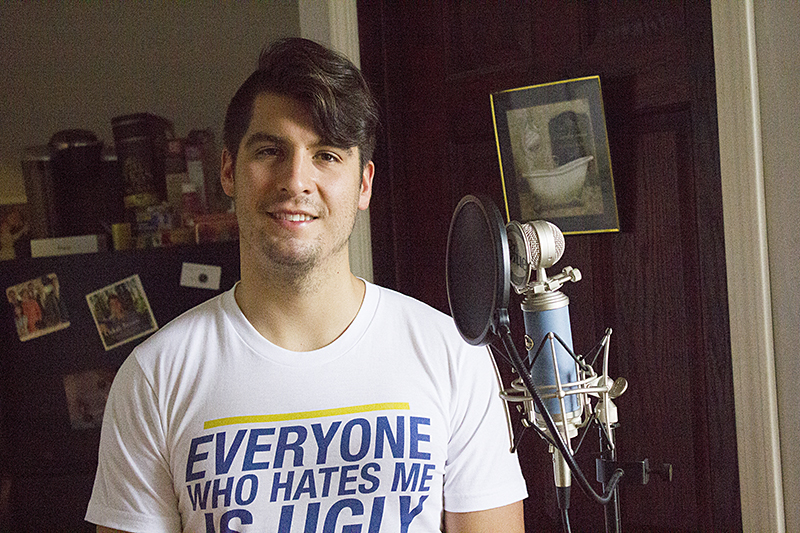 Albert Lea native Damian Montes is expressing himself through his music and his work as a youth care professional at Gerard Academy. Sam Wilmes/Albert Lea Tribune

AUSTIN — Making music and helping people is allowing an Albert Lea native to fulfill his calling.

Damian Montes, 25, is a youth care professional at Gerard Academy and a rapper who goes by the name DaboFlai.

Montes, who has been recording for about three years, said he started with just a microphone and a computer. He credits life experiences with improving his music and said his brother, Lukas Severson, has helped him in the process.

Montes remembered traveling to Los Angeles with minimal funds and rapping in front of strangers when he was 22 years old.

“I came back, and my confidence was just soaring through the roof,” he said. “I was like, ‘I just did that. I just got on a plane and went to another city, stayed there for two days, rapped and made it back here.’ That’s one thing I hold on to music for. Even if I wasn’t going to get big — it’s something that’s really brought me out of my comfort zone and made me more of an extrovert.”

Montes has recorded a music video for his song “Stayin’ Eazy” that has been uploaded to YouTube. The video was shot in November 2015 in downtown Albert Lea on the top of the Brick Furniture building. A drone and camera were used in the production of the video.

Fellow artist Brady Loch helped direct the video, which has had more than 5,100 views.

“He made the beat; I wrote the song,” Montes said.

“The song ‘Stayin Eazy’ — it’s just about being chill and having fun,” he said. “I just wanted to do it in my hometown, on a rooftop … my favorite places are always on roofs.”

Montes, a 2010 Albert Lea High School graduate, briefly attended North Central University. He then moved to Rochester, where he worked at Bear Creek Services, before moving to Austin.

“I like working in a place where I can just talk to people and can communicate,” he said. “I can go to work dressed up in my normal clothes. I don’t have to wear a uniform, and I can just be myself. I like that, which is another reason why I like to rap, because it just allows me to be myself.”

Montes, who sees potential in rapping, said he started making music for fun. He deleted his Facebook page a few years ago so he could focus his thoughts on writing lyrics.

“If I’m going to do something, I want to do it well, and I just want as many people to hear it as possible,” he said. “It’s not really about making it big or crossing that line of ‘oh, now I am famous or something’ — it’s more about making good music and having a lot of people listen to it, because it’s kind of my way to share myself to people.”

In his spare time, Montes enjoys weightlifting, running, playing basketball, recording and writing. Montes, who played basketball in high school, remembers playing the game as a child and said some of his first spoken words centered around the sport.

Montes’ music can be accessed on YouTube by typing DaboFlai. As of Monday, Montes had 163 subscribers to his page.