A memorial service will be at 3 p.m. June 3 at the farm his family lives on. 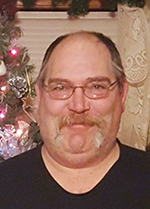 Bill was born May 8, 1966, in Albert Lea to Henry and Judith (Schyler) Wuerflein. Bill graduated from Albert Lea High School. Bill and Vicki, the love of each other’s lives, joined together in 1987. The two married Aug. 25, 2007. They moved to the family farm in 2005. Bill has two children and two stepchildren with Vicki.

Bill was a long-time employee for SunOpta. His CB handle that he used over the span of his truck driving career was Cow Boy Bill. Bill was a member of the Austin Posse for 26 years as security at surrounding fairs and street dances, parades and the tractor show at Racine.

Bill loved to play pool and softball, camping and horseback riding at Forestville and Hay Creek. He also loved farming, any type of work outside and helping others. He enjoyed gardening with his wife. Mainly, he loved doing things with his family.

Bill is survived by Vicki, his wife; daughter, Kayla; son, Cody; stepdaughter, Amy (Brandon) Hoium, of Austin; and three grandchildren, Dylan, Coy and Myia. Bill is also survived by his parents Henry and Judith Wuerflein of Ogilvie; and sisters Marie (Marty) Graham of Ogilvie and Becky (Curt) Stenzel of New Richland. Bill loved and enjoyed all of his nieces and nephews and their families.

Bill will be deeply missed by his family, friends, coworkers and neighbors. He touched many people’s lives in so many ways.