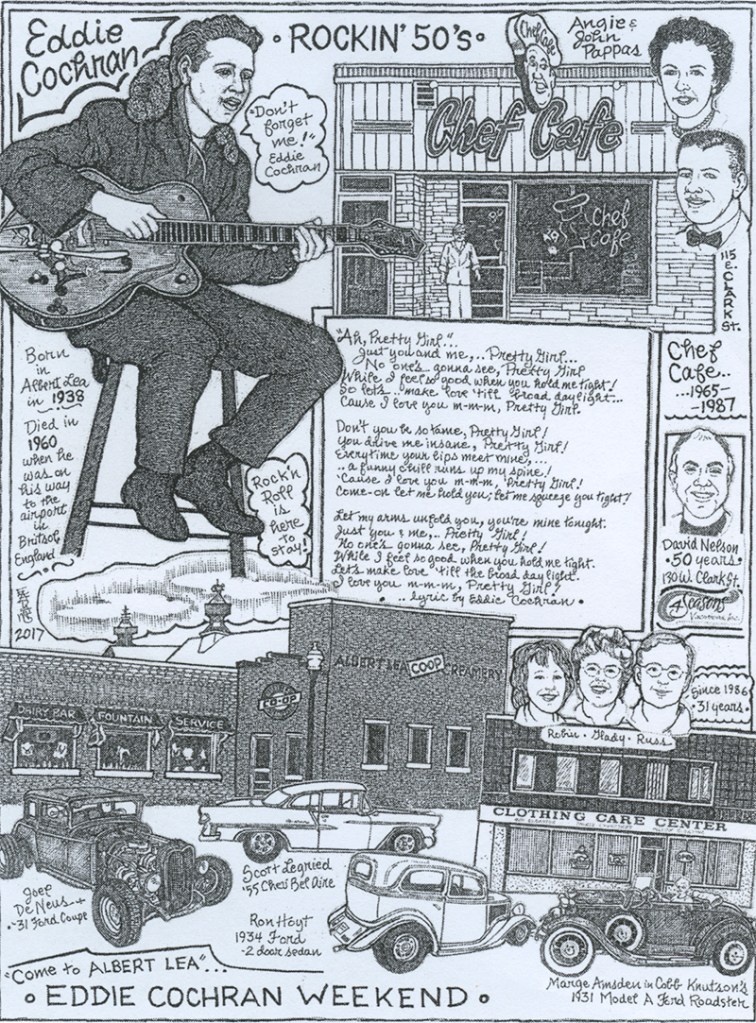 Eloise Adams has made the Eddie Cochran Weekend print for 24 years. - Provided

The print shows Eddie Cochran playing his guitar with the lyrics of “Ah, Pretty Girl” written by Cochran.

Also shown is the Chef Cafe, with owners Angie and John Pappas. The Cafe, at 115 E. Clark St., was a family operation with John, Angeline and their children. John, Charles, Michael and James did the cooking and baking, and Angeline, Georgeia, and Stephanie waited on tables. The children worked after school and on Saturdays and Sundays. The business existed from 1965 to 1987.

The fourth business depicted is the Clothing Care Center, at 116 S. Washington Ave., for 31 years. Robin, Glady and Russ of the business are shown.

The classic car show is a valued part of the Eddie Cochran Weekend. There are four cars depicted in the print that will also be at the show. Joel D. Neus with his Model A Ford Roadster, Scott Legried with his 1955 Chevrolet Bel Aire, Ron Hoyt with a 1934 red, two-door Ford and Cobb Knutson’s 1931 Model A Ford Roadster, with Marge Amsden shown at the wheel.

The prints can be seen at the drive-in social Friday night and on Saturday at the Adams Originals Shop on Broadway. The prints are numbered and signed by the artist. A limited number are also hand painted. The original drawing of the print has been donated to the Freeborn County Historical Museum and can be seen at that location.

Cochran was a part of the era that moved and shaped rock ’n’ roll. He started a tour of England with Gene Vincent in January 1960. After three months of touring, he was ready to head back to the United States to be with his family at Easter. On Easter Sunday 1960, Cochran died when his taxi cab crashed while on the way to Heathrow Airport.