A.L. graduate serves in his first long-term stay overseas after 13 years in the military 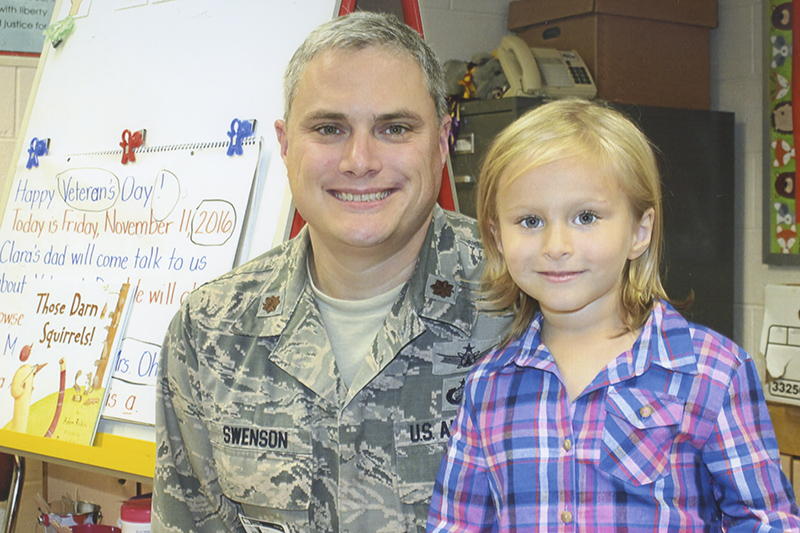 Major Philip Swenson sits next to his daughter Clara after he gave a presentation at her school in Virginia. He has two other children, Adam and Henry, with his wife, Dana. Swenson is currently stationed in Kabul, Afghanistan, as an end use monitoring chief. Provided

A man originally from Albert Lea is serving in his first extended stay overseas as an end use monitoring chief in Kabul, Afghanistan.

Philip Swenson graduated from Albert Lea High School in 1999 and went on to attain a degree in aerospace engineering from the University of Minnesota in 2003.

In 2004, Swenson joined the Air Force and was commissioned through Officer Training School. Although he has been in the military for about 13 years, this tour in Afghanistan is his first extended trip overseas. 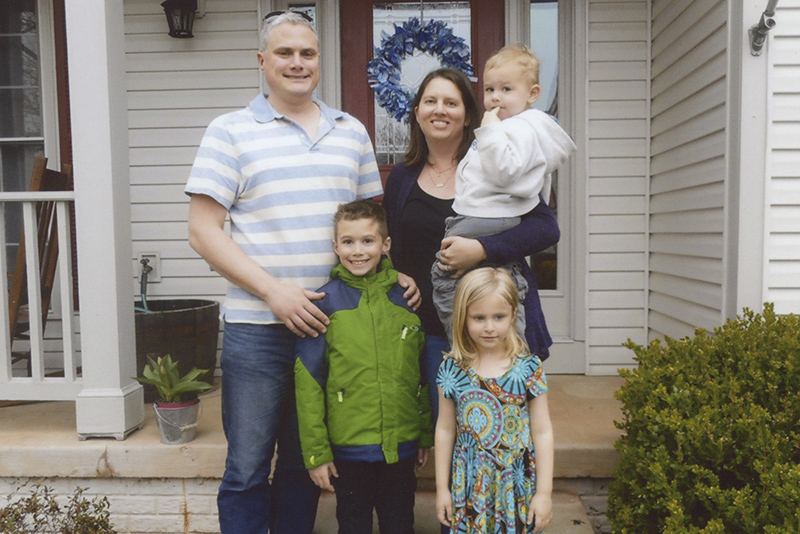 Maj. Philip Swenson stands with his family in front of their Virginia home. His wife, Dana, is holding their son Henry, as their children Adam and Clara stand below. Swenson is stationed in Kabul, Afghanistan and is due to return home sometime in October. Provided

“I joined because I was interested in the Air Force’s aircraft and spacecraft programs, and I wanted a chance to work on some of those efforts,” Swenson said. “I joined as an astronautical engineer so it worked out well.”

Swenson was first stationed at Los Angeles Air Force base where he worked on Atlas V’s. His job involved traveling to places where parts were made for the rockets, including Russia.

From there, Swenson went on to earn his master’s degree in astronautical engineering from the Air Force Institute of Technology at the Wright-Patterson Air Force Base in Dayton, Ohio.

He was then moved to the National Reconnaissance in Chantilly, Virginia, where he received a 2014 Early Career Stellar Award from RNASA (Rotary National Award for Space Achievement) for his work in overseeing the testing and launching of satellites.

He was recently promoted to the rank of major, meaning he would likely have to see time overseas. He chose to serve in Kabul as an end use monitoring chief and has been there since the middle of April.

His duties as are to lead a team in making sure that the Afghan government is fulfilling their obligations, by protecting and using the equipment that is given to them by the United States to help them fight against insurgents.

He will return to the United States sometime in October when he will go to work at the Pentagon to work on funding for the Atlas V rockets.

For Swenson, six months away is a long time to be separated from his family. He talked about his family when asked about what he misses the most about home. At their home in Virginia, Swenson has a wife, Dana, and three children, Adam, Clara and Henry.

His parents, Casey and Peggy Swenson, are still residents of the Albert Lea community. Casey Swenson, having served in the military himself, is proud of his son’s service, but like any parent he is concerned about his son’s safety.

“Guys that [Philip] talked to beforehand told him that Kabul would be one place where you stayed busy,” Casey Swenson said. “I would have preferred he be bored out of his mind and safe, if there is any place safe in the Middle East. I wish he would have taken the boring job, but he’s done a great job in the Air Force.”

Although working in the Air Force has Swenson traveling all over the globe, Philip Swenson still recommends joining to anyone who has an interest in it. He promotes young people who are thinking about it to come with a plan. Whether it be job training, paying for college or making connections within the industry, he emphasizes having a goal in mind.

“I would highly encourage (joining the military),” he said. “Most people aren’t aware of how diverse the military is. We need logisticians, engineers, nurses, personnelists, mechanics, IT specialists, electricians and so on… The best part about being in the military is the people you get to work with. I’m privileged to serve with some of the best and brightest men and women from all over the country.”