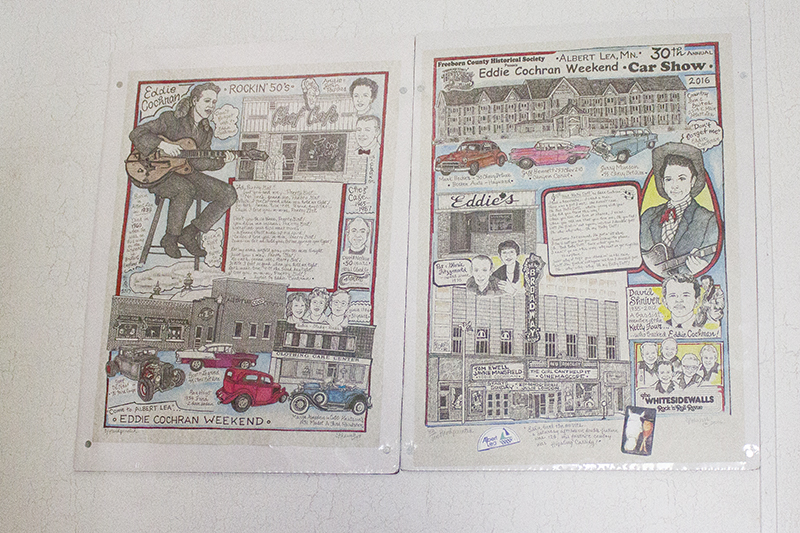 Albert Lea resident Mary Lahs has collected all 24 of the Eddie Cochran prints.

Born and raised in Albert Lea, Lahs has always been connected to the area. She left Albert Lea with her husband, Larry Lahs, who was in the United States Army for 20 years after they got married. They have lived in Maine, Alaska, Florida, California, Texas and Germany. After 35 years they moved back to Albert Lea.

Lahs got her start collecting the prints when she came back to Albert Lea in 1997. Her friend bought her one and now Lahs gets the new print that comes out every year and hangs them in her house.

The prints bring a lot of memories for Lahs. There is one print that has a dairy bar and one with A&W, both places where she had worked.

Albert Lea history has always been interesting to Lahs. She thinks the buildings are the most interesting and remembers a song saying “Tear down the building and make a parking lot.”

Lahs said she may have known Eddie Cochran when she was a child.

“I know where his house was and my aunt ran around with his sister,” she said.

After being away from her hometown, Lahs’ husband asked her if she wanted to go back to Albert Lea. She said yes and they have been back since 1997. Lahs said her family is what drew her back to Albert Lea, as their children and grandchildren live in town. Also, the “Minnesota nice” attitude is something she appreciates, as she said people aren’t as friendly anywhere else.

“Like my aunt always told me, ‘Albert Lea has always been in your heart,’” Lahs said.