Funeral services for Avis Ordalen will be at 10:30 a.m. Friday at Grace Lutheran Church in Albert Lea. The Revs. Shane Koepke and Sean Forde will officiate. Visitation will be one hour prior to the service. Interment will be in Graceland Cemetery in Albert Lea.

Avis was born Dec. 31, 1928, to Genevieve (Ottun) and Albert Friese at their home inWanamingo. Avis was one of eight children and grew up on a large farm operated by her father. She often worked in their fields, helping her father and milking cows. 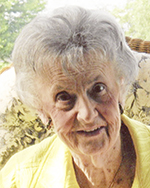 Avis and Eddie were both great singers and often did solos or duets at church. Avis was also known for her yodeling skills. Avis was a very talented decorator and was well known for her beautiful Christmas displays on Bridge Avenue. She won the city-wide lighting contest many times over the years. Avis was well known for her decorating abilities, both indoors and out. She loved gardening and flowers, but the biggest smile would come to her face when she was holding her grandchildren. She will be dearly missed.