Following retirement Doris and Ivan moved to Lakeland, Florida, for 10 years. In December 1997 they moved to St. Charles to be near family. Ivan died on June 14, 2003. Doris later moved to Rochester. 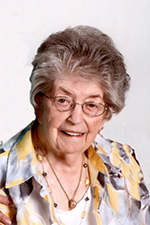 In addition to Ivan’s death, Doris was preceded by her son, Allan, in 2016.

Services to remember Doris will be at 11 a.m. Saturday at Hoff Funeral and Cremation Service in St. Charles. The Rev. Heather E. Klason will officiate. Friends may call from 10 a.m. until the time of services Saturday at the funeral home. Doris will be buried next to Ivan at Graceland Cemetery in Albert Lea.

To share a memory of Doris online and view her video tribute when it is available, visit www.hofffuneral.com.

Doris’ family would like to thank the staff at Cottage Wood Senior Living Community and Dr. Thomas Jaeger of Mayo Clinic.

Memorials are preferred to the family.