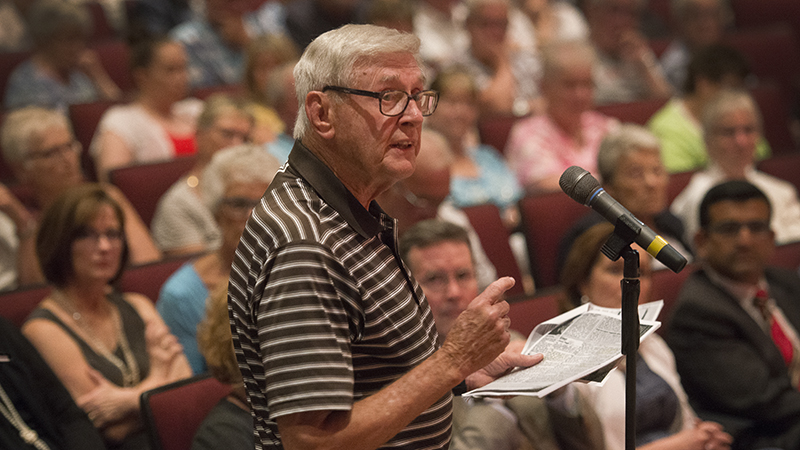 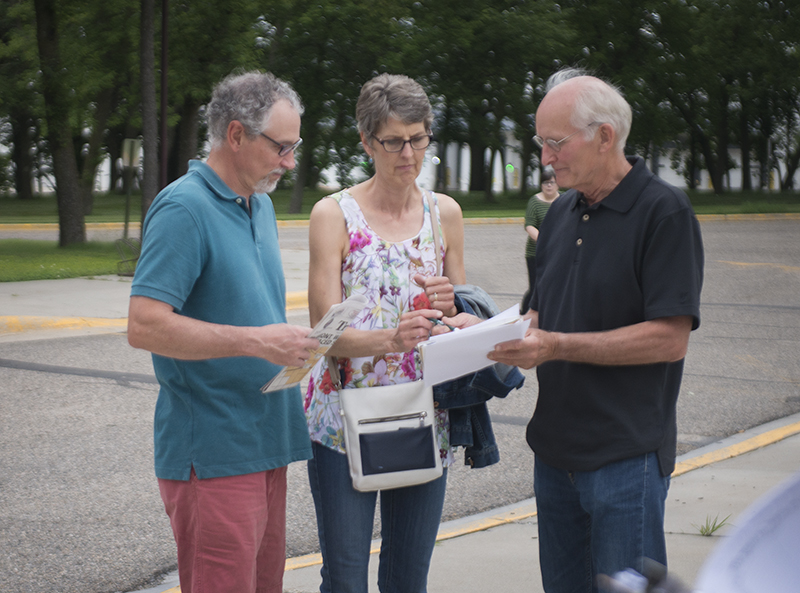 Those attending Thursday’s public forum had the opportunity to sign a petition against the decision to transition most Albert Lea inpatient services to Austin. – Colleen Harrison/Albert Lea Tribune

After about an hour of the panel answering questions presented by moderator Randy Kehr, executive director of the Albert Lea-Freeborn County Chamber of Commerce, more than 15 community residents and health care professionals spoke when the microphone was turned over to the audience to ask questions.

Resident Paul Overgaard, who led a prior effort to raise money for the hospital, questioned why Albert Lea stakeholders not employed by Mayo were not involved in making the transition. 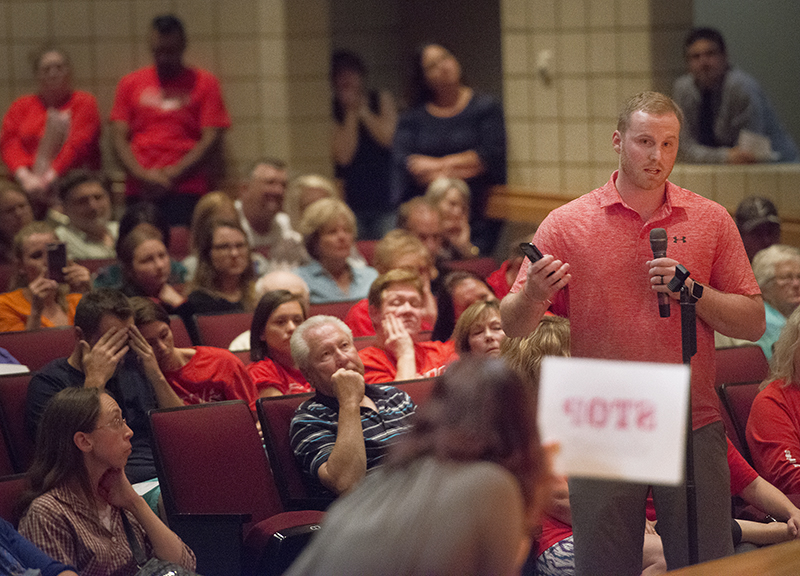 AJ Kortz, a nurse from the Albert Lea area, speaks on behalf of nurses while a time monitor holds up a sign reading “Stop” during Thursday’s public forum to discuss the transitioning of most Albert Lea inpatient services to Austin. – Colleen Harrison/Albert Lea Tribune

Reasons for the decision

Ciota said the two hospitals had a combined net operating loss of $4.6 million in 2015 and $8 million last year. Ciota and Gostout said the decision to transition services to Austin was made in a patient-centered way and so patients who need more care could be closer to the planned Destination Medical Center.

When asked if there was a plan that would have kept more services in Albert Lea, Ciota said he was told by Mayo Clinic leadership in Rochester that it would no longer be feasible to duplicate services in communities 25 miles apart, and he presented an overview of the process that led up to the hospital’s public announcement of the transition two weeks ago.

Gostout said the transition is needed to effectively operate Albert Lea and Austin hospitals. She said declining reimbursements, increasing costs and staffing shortages are prevalent in the health care field.

According to Gostout in an interview before the meeting, 65 percent of patients the organization takes care of are on Medicare or Medicaid. Medicare reimburses the hospital 33 percent on the dollar, while Medicaid reimburses 22 cents on the dollar.

She said the number of patients with Medicaid rose in 2016.

“We have come to realize we must make changes now in how health care services are delivered in order to ensure that we can continue to provide those services that you need now and in the future,” she said. 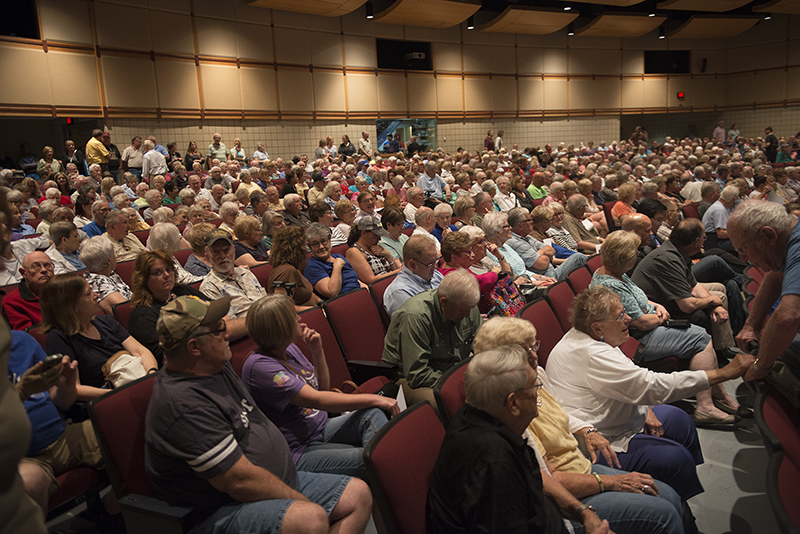 Gostout drew the ire of the crowd when she compared traveling 23 miles for childbirth services to traveling the same distance to buy ice cream.

Albert Lea resident Don Sorensen said the community could not trust the words of Mayo officials anymore because of the way the hospital’s transition plan was developed.

“The fact the Mayo system elected to implement a long-range plan that effectively closes our hospital without consulting city and county officials is the height of hypocrisy and arrogance,” he said.

Sorensen predicted everyone in the auditorium would suffer from the hospital’s decision.

“Albert Lea without a hospital is not acceptable,” he said.

A paper with 1,245 signatures from concerned local residents was presented during the meeting. 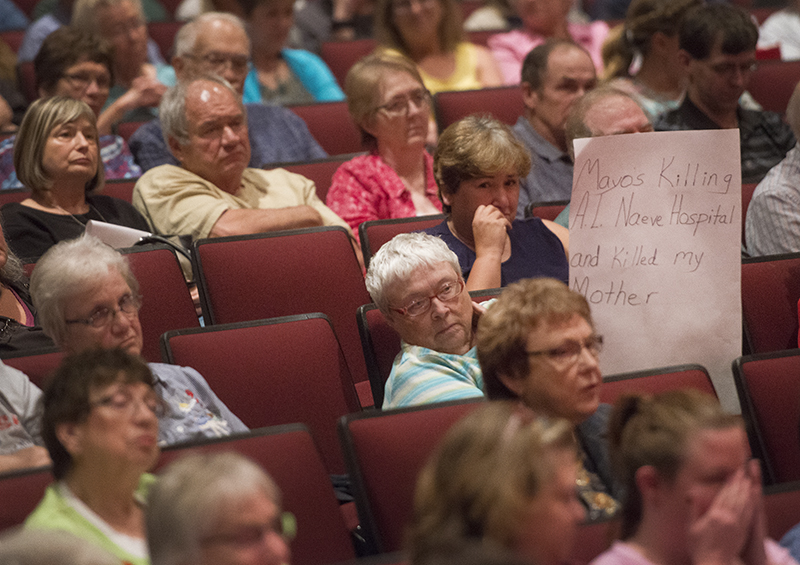 Ciota denied the decision to transfer services to Austin was made because of the influence Hormel has in the community.

“Any statement to the contrary is just not factual,” he said.

Minnesota Nurses Union organizer Jay Armstrong said Mayo officials had presented what works for the hospital, not for the community. Hospital officials sprung, “if not ambushed,” Albert Lea with the decision, he said.

Armstrong said the residents of Albert Lea needed to move forward with their own needs in mind.

Albert Lea nurse A.J. Kortz questioned whether there would be more beds in Austin than there are in the two hospitals once inpatient services are merged.

Gostout and Ciota said patients will receive a higher level of care once the services are merged. Fewer patients will have to be sent to Rochester for some health care services due to larger units, and better staffing that will be enabled by the transition, they said.

“Together, we’ll be stronger,” Gostout said. 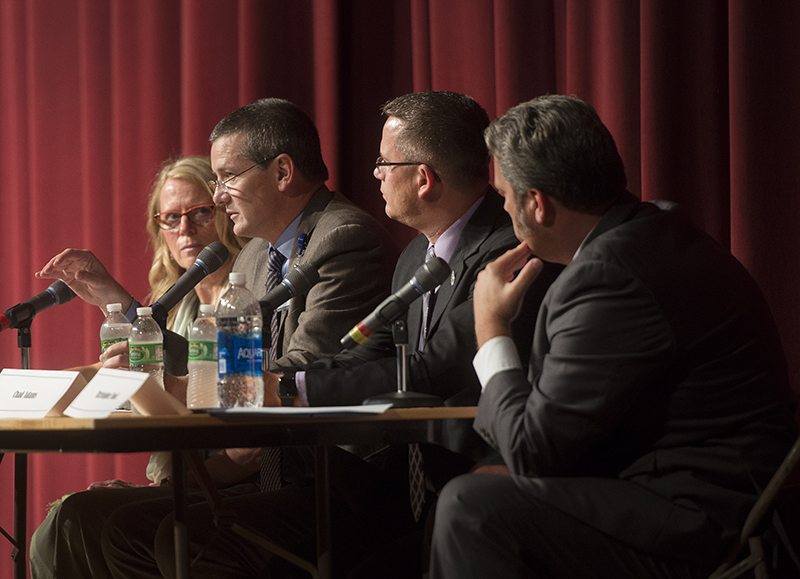 They said their main focus is on making the Albert Lea hospital a premier outpatient and inpatient psychiatric destination.

Gostout said the transition is being made as the hospital addresses a shortage of physicians.

“We think this is going to give us our best chance, but none of us thinks this will make it easy to recruit physicians,” she said.

The first of the changes in the transition is expected to be moving the intensive care unit in Albert Lea to Austin in October.

Inpatient surgeries are slated to move to Austin in January 2018, and the behavioral health center is expected to move from Austin to Albert Lea in 2019. Labor and delivery services will be the last to relocate to Austin in late 2019 or early 2020.

Ciota disputed a claim made by the nurses’ union that up to 500 jobs could be lost in Albert Lea from the transition.

“That number if just not based on any type of fact that I am aware of,” he said.

Ciota said though jobs will be shifted to Austin in the short term, he expects future job gains between the two facilities. The length of service health care professionals have accrued will count as the transition unfolds, he said.

There are an average of 10 inpatients at the Albert Lea hospital each night, Ciota said. There are two births a day at the hospital, along with a daily average of three patients in the Intensive Care Unit.

Current fees for ambulance rides will remain the same after the transition is complete, Ciota said. 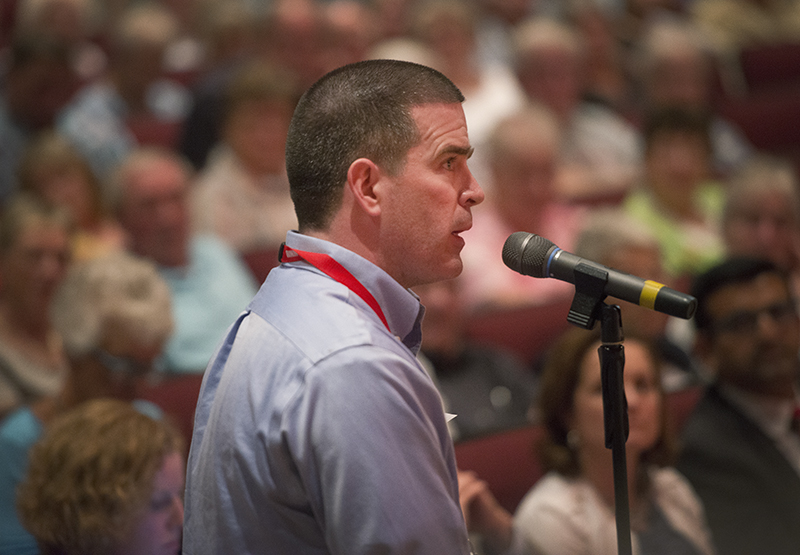 Adams said city officials have reached out to hospitals and hospital experts to chart the city’s plan of action moving forward. Attracting a new hospital to Albert Lea will be challenging because of the competition Mayo provides, he said.

Adams said he plans to continue reaching out to gauge interest, and he believes it is difficult to measure the economic impact the transition will have on Albert Lea.

He expressed concern there would not be as much traffic into the community from patients and their friends and family members.

“We believe there will be some economic consequences to that, based on the information we have today,” Adams said.

County Public Health and Human Services departments could see changes based on the transition, Shoff said.

Mayo Clinic Health System officials plan to unveil a website with information about the transition. More public meetings are planned to discuss the transition.

After the event, Albert Lea nurse Breanna Munson said though she did not think the community received a lot of answers, she appreciated the event.

“The community came together, and they had a lot of good things to say,” she said.

Shoff said the meeting was the beginning part in the transition process.

“This is the first step in a long journey to move forward as a community,” he said.

Ciota said he appreciated community members for expressing their views.

“I love Albert Lea,” he said. “I love the medical center, as does everybody who came here today. This is what I expected, and quite honestly I would have been disappointed if we did not have this emotion … they are standing up for what they think is right, and I applaud them for that.”