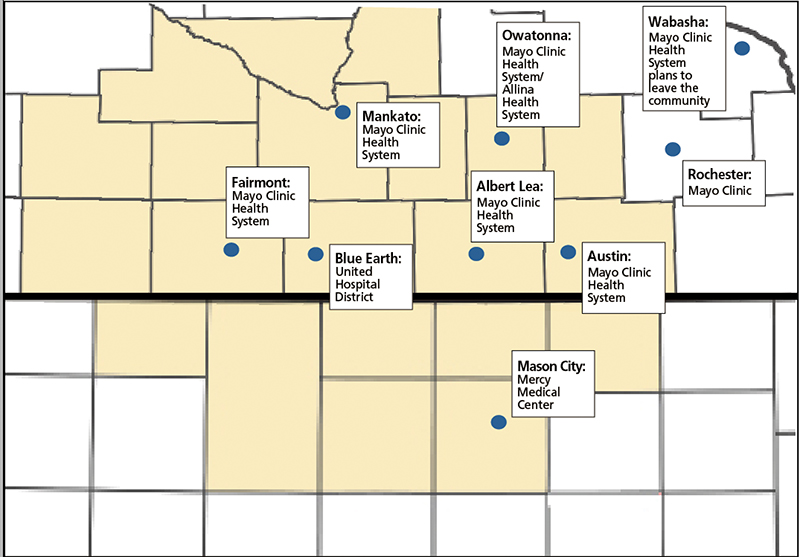 Mayo Clinic Health System operates hospitals in many communities in southern Minnesota, though there are a few cities that have hospital systems operated by other organizations. - Graphic by Sarah Stultz/Albert Lea Tribune

Mayo withdrawing services in Wabasha after many years of conflict; many Fairmont services transferred to Mankato

Mayo Clinic Health System’s decision earlier this month to transition most inpatient services from Albert Lea to Austin was met with controversy locally. The hospital system has also sparked controversy in Fairmont and Wabasha.

Mayo Clinic Health System took over the hospital in Fairmont in 2001. By 2009, hospital officials increased the level of service at the facility with approximately 45 primary and secondary physicians who provided services the community could use locally, said Fairmont City Councilor Tom Hawkins.

In a column published online in early 2016, Hawkins said health care providers and their staff contributed to the economic health of Fairmont. The number of primary and secondary physicians and hospital staff members had decreased from 735 employees to around 400 employees in 2014.

“Fairmont leadership was transferred to Mankato, as they became the hub of the western region,” he said in the column. “Over the next three years, many doctors and providers moved on or were forced out and not replaced. Instead of replacing these providers in Fairmont, leadership in Mankato appears to have directed those services to Mankato to enhance their hospital.”

“All of a sudden, community members started questioning why they had to leave town for basic services,” he said. A committee was formed in spring 2014 in Fairmont to receive answers from the hospital.

“Mayo made a commitment to maintain Fairmont hospital as a regional hospital, and it was obvious that was no longer the case,” Hawkins said.

In a statement Tuesday, Mayo officials said the services the hospital offers in Fairmont are “always influenced by the needs of our patients and what’s sustainable for the organization. “While most of patients’ needs can be met locally, the benefit of being part of a larger system is that patients have direct connections to more complex levels of care, when needed,” the statement reads.

According to the hospital, the Fairmont practice has experienced noticeable growth, with nine new providers in the last year.

“In addition, both a new OB-GYN physician and a new family medicine provider will begin practicing at Mayo Clinic Health System in Fairmont in August,” the statement reads. “Mayo Clinic Health System in Fairmont continues to recruit for primary and specialty care providers, but is not immune to nationwide physician shortages and the complex, evolving nature of the health care environment.”

“He claimed that their reason for reducing services is that they had an understanding that the health care market area was only 29,000 people.” he said. “At the end of a contentious meeting, there was discussion about addressing these issues by meeting with a smaller committee. When Mayo chose not to engage, the only option available was to hold a public meeting to see if the frustrations with our local health care were widespread.”

A contentious public forum that received state media attention in late October 2014 in Fairmont  drew more than 400 people, Hawkins said. Representatives of St. Peter and Madelia hospitals reportedly shared difficult experiences they had with leadership from Mayo Clinic Health System and how it affected their hospitals and communities.

Hawkins said the citizen committee told Nesse in a meeting in March 2015 the Mankato hospital had cost the community jobs due to local residents needing to travel to Mankato for basic services that used to be available in Fairmont. Other concerns were expressed to Nesse, including three-month wait times for urology and sleep lab services, requests by receptionists for patients not wanting service delays to come to Mankato for appointments, increased on-call hours for physicians due to a shortage and patients being transferred daily to Mankato because of a shortage of available staff.

“There is no reason for any of this to have happened,” Hawkins said in the column. “Our population has the same health care needs we have had for years. We requested that Mayo restore services to the level they were before Mankato took over our hospital.”

Nesse reportedly expressed confidence in hospital leadership, and he apologized and directed leadership to fix problems they were financially able to address.

Hawkins said in the column no real progress had been made in the 15 months since to re-establish services the community had prior to regionalization.

“This is due to continual blocking by Mankato leadership, as well as Mayo,” he said. “The number of physicians on staff has dropped even further, making it harder than ever to recruit. People are getting more and more disappointed with the level of service.”

In the column, Hawkins said Mayo needed to fulfill promises it had made by acknowledging that market demand in the Fairmont region for speciality service is a population of 80,000, not 29,000. He requested the hospital give greater control of the Fairmont facility back to the local community via community board members. He wanted the hospital to establish servant leadership “with the right leaders to transform the culture of Fairmont hospital,” and he requested the health system hire general and orthopedic surgeons, urologists, family medicine practitioners, hospitalists and internal medicine physicians so more services could be provided in Fairmont.

Hawkins asked for phone reception and scheduling to move back to Fairmont, and he wanted the sleep lab to return to full service to alleviate month-long waits for appointments.

“They don’t know how to do small-town health care,” Hawkins said.

“My definition of Mayo is arrogance.”

Mayo Clinic announced last week it will withdraw its regional service from Wabasha after years of acrimony, according to the Rochester Post-Bulletin.

The newspaper reported that St. Elizabeth’s Medical Center announced plans to open a primary care clinic next month led by Dr. Dennis Spano and nurse practitioners Sharon Riester and Kayla Dascher; those three are among many who have resigned from Mayo Clinic Health System over the last 12 months.

The Post-Bulletin reported regional tensions were simmering along the river corridor since Mayo announced in February 2015 that it was ending labor and delivery services in Wabasha and Lake City, while consolidating services in Red Wing. Mayo had invested $3.8 million at the Wabasha facility in 2000 while signing a 15-year agreement.

“We worked closely with the hospital and Mayo to identify we expected a better level of service for our community,” he said.

Additional reductions of services prompted the city of Wabasha to form a Rural Health Care Task Force in January 2016.

Mayo Clinic officials were told if they did not provide the community with those essential services, the community would do so itself. Friedmeyer said though the community has been fortunate to have Mayo as a partner, the town was looking for something the hospital was not going to provide.

“I think we are very fortunate in our opportunity and ability to make this change and still provide those expanded, appropriate services for health care,” he said.

According to Mayo Clinic Health System, the hospital agreed to support St. Elizabeth’s decision to develop an integrated primary care clinic and hospital model after discussions with leaders from St. Elizabeth’s Medical Center and Ascension — the health system that owns St. Elizabeth’s, as well as after feedback was gathered from Wabasha community leaders.

“We agree it would best serve the community of Wabasha moving forward,” said Brian Whited, CEO of Mayo Clinic Health System in Cannon Falls, Lake City and Red Wing, in the press release.

According to Mayo Clinic, the hospital and St. Elizabeth’s have a long history of working together to serve the Wabasha community.

“Long term, given the unique circumstances and history between Mayo Clinic Health System and St. Elizabeth’s, we need to focus on collaboration to meet the needs of the community, not competition. Once St. Elizabeth’s has a fully-established primary care practice care in Wabasha, Mayo Clinic Health System will transition out of primary care in Wabasha. We expect the transition to be completed by the end of September.”

A public meeting featuring a question-and-answer session to discuss the transitioning of most Albert Lea inpatient services to Austin with Mayo officials and government leaders is planned for 7 p.m. today in the Albert Lea High School auditorium.

The first of the changes in the transition will be moving the intensive care unit in Albert Lea to Austin in October.

Inpatient surgeries will move to Austin in January 2018, and the behavioral health center will move from Austin to Albert Lea in 2019. Labor and delivery services will be the last to relocate to Austin in late 2019 or early 2020.