Francis K. Gulbertson of Albert Lea passed away Wednesday, June 14, 2017, at his home in Albert Lea. 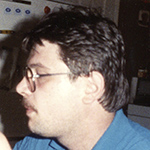 A time to greet family and friends has been scheduled from 4 to 7 p.m. Monday at Bonnerup Funeral Service in Albert Lea.

Francis was born June 18, 1959, the son of Francis and Opal (Wagner) Gulbertson.

He attended Freeborn public schools. Francis had been employed by Hudson Foods, B & W Cafe, Freeborn County Coop, Kwik Trip and most recently as a clerk at Love’s Truck Stop. He was a lifelong resident of Freeborn County and enjoyed camping, Bingo, puzzle books, music and anything to do with wolves.

He was preceded in death by his parents; grandparents; sister, Brenda Avelar; brother-in-law, Eddie Boerner; and nieces Josephine Boerner and Vickie Boerner.