Fredric Ralph Peterson, 64, passed away suddenly at his home in Freeborn on Thursday, June 8, 2017.

A memorial service will be at 10:30 a.m. Tuesday at Bruss-Heitner Funeral Home in Wells with the Rev. Cherie Daniel officiating. Visitation will be from 5 to 7 p.m. today at Bruss-Heitner Funeral Home and will continue one hour prior to the service on Tuesday. A luncheon at the Gilmore-Stensrud American Legion in Freeborn will follow at 11:30 a.m. To leave an online condolence visit brussheitner.com

Fredric will continue his cooking experiments and good humor for others up in heaven. He was born in Mason City on Nov. 17, 1952, to Sophus and Dorothy (Witter) Peterson. He grew up in Clear Lake, graduating from high school in 1971. He went on to North Iowa Area Community College and then finished his Bachelor of Fine Art in studio art and later his Bachelor of Science degree in art education at Mankato State University. 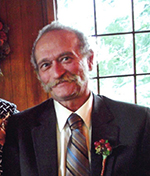 Fred married Joan Jones in August 1982 and the couple eventually settled in Freeborn. Together they raised two children, Samuel and Autumn.

Fred held various positions through the years, including jobs at Brown Printing, teaching school for Alden-Conger/Freeborn — later subbing in area schools, and custodial work for both Freeborn Congregational Church and Freeborn Lumber Co. Fred had many interests, including reading biographies, hiking in the state parks, bird watching, gardening and bread baking. His bread was thoroughly enjoyed by his family and he would often give loaves as gifts, which were enthusiastically received. Fred really enjoyed singing and took part in choirs throughout his life — most recently including the local Albert Lea choir, The Careyaires, until declining health prevented him from continuing participation. Fred enjoyed movies and weekly took his wife to the show.