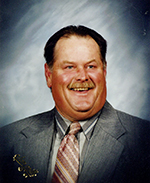 Gene Allan Tue was born June 7, 1953, at Naeve Hospital in Albert Lea, the son of Roger Dale and Darlene L. (Larson) Tue. He attended school in Lake Mills and graduated with the Lake Mills High School class of 1971.

He played a lot of pool where he made many friends. He traveled a lot and attended many rock concerts. He collected guns, model cars and tractors and vinyl records. He enjoyed riding his Honda Goldwing and wood working. He loved spending time with his friends and family, but mostly being with his grandchildren. He always took care of everyone else and not himself. He never lost his stubborn edge that just made him Geno.

Gene was preceded in death by his father in 1992; his brother, Gary; and one stillborn son, John.