Get out into the great outdoors 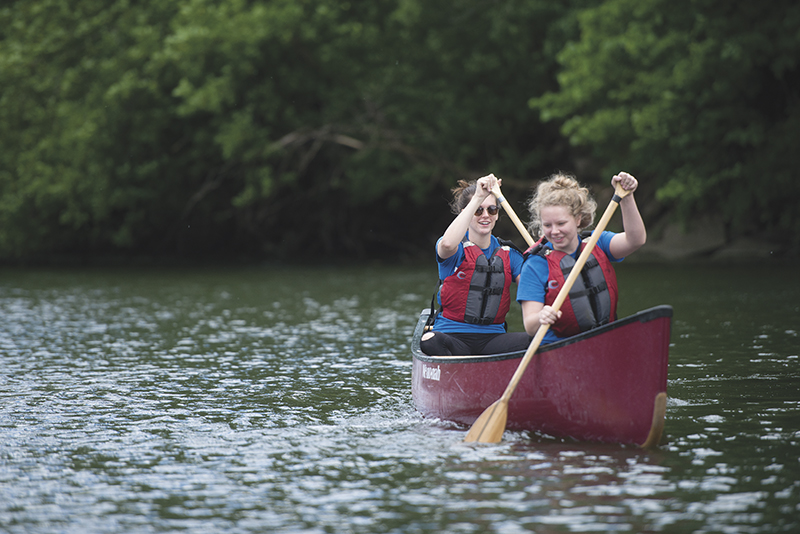 From recreation to socializing, there’s lots to do in Albert Lea

By Evelyn Seffinga and Sarah Stultz

Summer is not always as fun-filled as sunscreen and baked beans commercials depict. People still have jobs, they still need oil changes and many cannot pick up and head to the Twin Cities for a fun activity on a Tuesday night in July out of the blue.

The children are out of school, the daylight lasts longer and to many, it feels wrong to stay inside.

Scott Hanna wants to help fill some of those empty boxes on your summer calendar and maximize the number of new activities your family tries this summer. 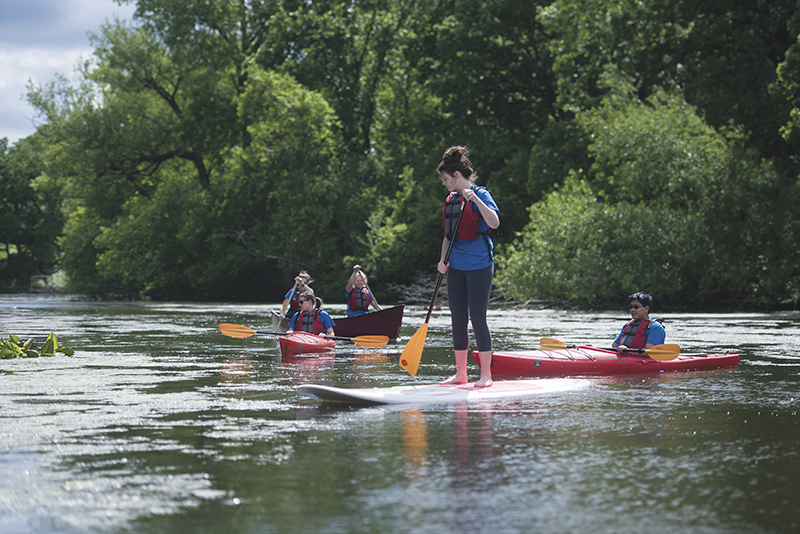 Canoes, kayaks and paddleboards, among other items, can be rented out for use on Albert Lea and Fountain lakes. – Colleen Harrison/Albert Lea Tribune

“But to most people, I am just the rock-gym guy,” Hanna said.

As a firefighter, activities volunteer for the school district and Albert Lea native, Hanna is not easily intimidated by trying new things in town.

Hanna explained his theory that people in Albert Lea are more welcoming of newcomers if they are introduced to natives through a fellow Albert Lea native.

Hanna and the Brookside Boathouse have been instrumental in organizing a group for adults called Gather, who want to meet new people in town and try new things.

“If you go somewhere (as a new person in Albert Lea), it is going to take you multiple times before people are going to start opening up,” Hanna said.

One example of something the Gather group might do is take a trailer of bikes out of town for the evening, and proceed to bike back to Albert Lea as a group. The group will enjoy camaraderie as well as physical activity in a conducive environment.

Hanna has a hard time deciding which summertime opportunity in Albert Lea is his favorite because he dabbles in so many different things.

“The problem is, I like a lot of things — I like hiking, I like canoeing, I like running into retired school teachers here because they had an impact on my life, I like the community gardens although I don’t want to be in the garden. You know, I like all these things,” Hanna said. “I like it all, I want it all and I have it all — and that is really why I love Albert Lea.” 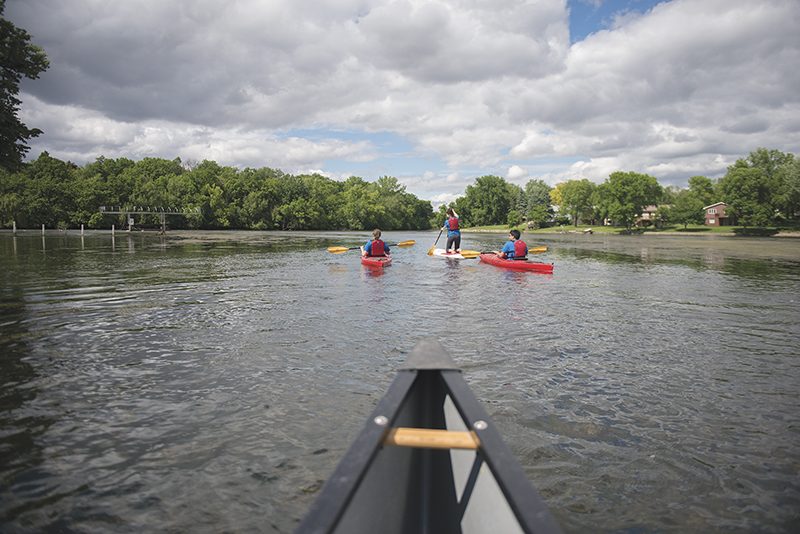 There’s plenty to do and see on the water in Albert Lea during the summer. – Colleen Harrison/Albert Lea Tribune

As a coordinator for both the Boathouse and rock gym, Hanna meets people every day who are either new to town or new to an activity.

“Some people use these activities as a social opportunity to meet up with people and get together. Other people use this as a way to get away from everything,” Hanna said.

The Brookside Boathouse offers opportunities for people to take an ordinary Tuesday night in Albert Lea and turn it into something extraordinary.

The activities the Boathouse offers are extensive. It has something for everyone, Hanna said. Bikes, canoes, kayaks, stand-up paddleboards, Hamboards, croquet and bocce are all available for rent.

Hanna pointed out there are other options in town to rent similar equipment, but the Boathouse has enough inventory that it is able to accommodate larger groups of people.

He said not everyone in Albert Lea has room to store a kayak or a bike in their home. The Boathouse services offer a sensible solution for those who crave the outdoor lifestyle.

For one punch pass, you can take a croquet set to the lawn and play croquet.

The Brookside Boathouse is adjacent to both the dog park and the community gardens in Albert Lea.

Hanna offered a warning to those people hoping to spend large quantities of time at the Boathouse this summer — that gardeners might try to give you a free squash or excess tomatoes or onions. 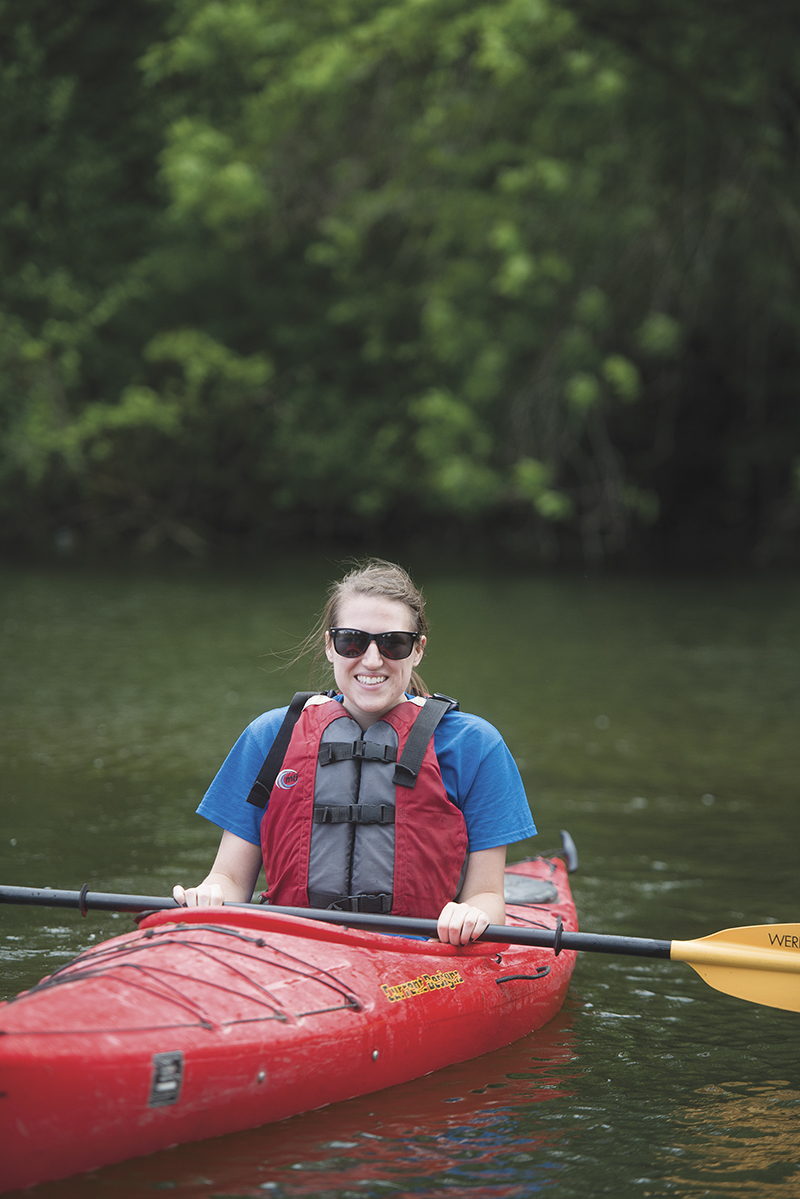 Hanna said there are many miles of biking, hiking, walking or running trails in the community — whether in town around the lake or out into the woods at Myre-Big Island State Park.

The Blue Zones Walkway offers a 5-mile trek around Albert Lea’s Fountain Lake that is popular for both walkers and runners.

The Blazing Star Trail is a winding, paved trail that runs from Albert Lea Lake to Myre-Big Island State Park, a distance of approximately 6 miles.

Hanna outlined some of the other opportunities to adventure seekers this summer:

• The state park offers stand-up paddleboards, canoes and kayaks that can be checked out, along with GPS equipment for geocaching in the state park.

“There are geocache sites all over Albert Lea,” Hanna said.

“The people at the rock gym have a really strong environmental sense. And with that, everybody is enthusiastic so they will teach new people how to do things without judging their skill levels,” Hanna said.

•   The Albert Lea city pool offers a whole day’s worth of fun and is in close proximity to pickleball courts.

Albert Lea has 24 miles of shoreline, and its deepest spot is 6 feet. It has a few accesses. One is at Frank Hall Park in Albert Lea and features a pier and a boat launch. Another with a dock and a boat launch is at a place along South Shore Drive called St. Nicholas, a former town. A third fishing spot is at the bridge over Shell Rock River on the south shore.

Boats can access Fountain Lake at Brookside Park or along Minnesota Highway 13 on Edgewater Bay. Popular spots along the shore are a fishing pier at Edgewater Park, the bridge by Dane Bay, the Hatch Bridge, the dam on Bridge Avenue and Katherine Island. Catfish are found in deep water near woods, and panfish can be found throughout the lake. Walleye, northern and bass can also be found there. 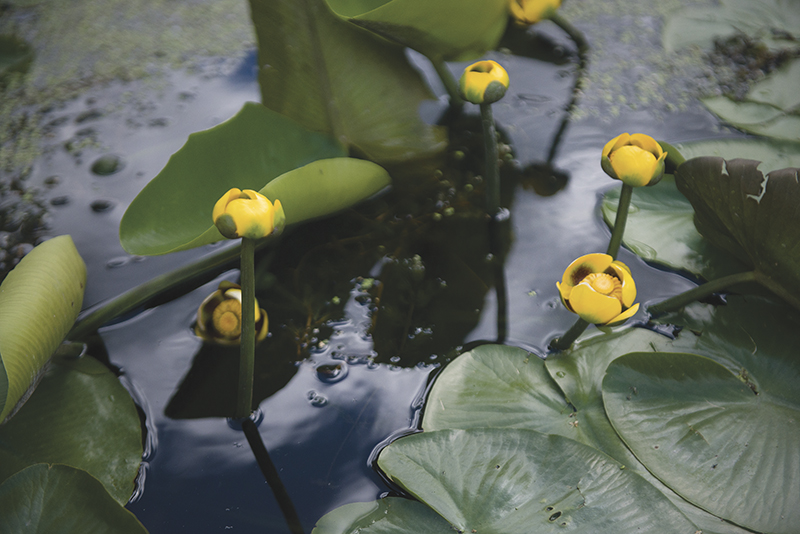 Lilypads have started to thrive on Fountain Lake, according to Scott Hanna. – Colleen Harrison/Albert Lea Tribune

Albert Lea is packed with events in the summer months, many of which are designed to bring the community together.

From Wind Down Wednesday on the third Wednesday of every month in downtown Albert Lea to Thursdays on Fountain every Thursday, there is something for every taste.

Wind Down Wednesday will be July 19 and Aug. 16 on Broadway. A music, food, arts and crafts fair, the event has attractions for both children and adults.

Susie Petersen, Albert Lea Convention and Visitors Bureau executive director, said this year marks the fifth anniversary of the downtown festival, and it is sure to not disappoint with entertainment scheduled all day long. New this year, food trucks and home-based businesses are welcome at the event, along with artisans and craft vendors.

“Enjoy the bustling of our vibrant downtown Albert Lea and visit all the unique stores,” Petersen said.

Thursdays on Fountain is a new event this summer in Fountain Lake Park, featuring different musicians every week — except for the week of the Freeborn County Fair. Bring a lawn chair or a blanket to sit and enjoy the music near the gazebo, or take a seat on the grand staircase that leads down into the park.

In addition to free music, Albert Lea Community Education canoes and kayaks will be available at Thursdays on Fountain for use for free on July 20 and Aug. 17.

For people interested in making some new friends, the Gather organization has a book club that meets the second Thursday of the odd months of the year. That group will next meet at 7 p.m. July 11 in the Intego conference room at 1206 W. Front St. to discuss “The Signature of All Things” by Elizabeth Gilbert. After that, the next book club meeting will be Sept. 14 at the same time and place. The book for that meeting will be chosen at the July book club meeting.

Aside from the book club, the group will meet July 13, Aug. 10 and Sept. 10 in collaboration with Community Education.

“If you are new to Albert Lea, visiting the area or lodging in our hotels, this summer has something for everyone to enjoy,” Petersen said. 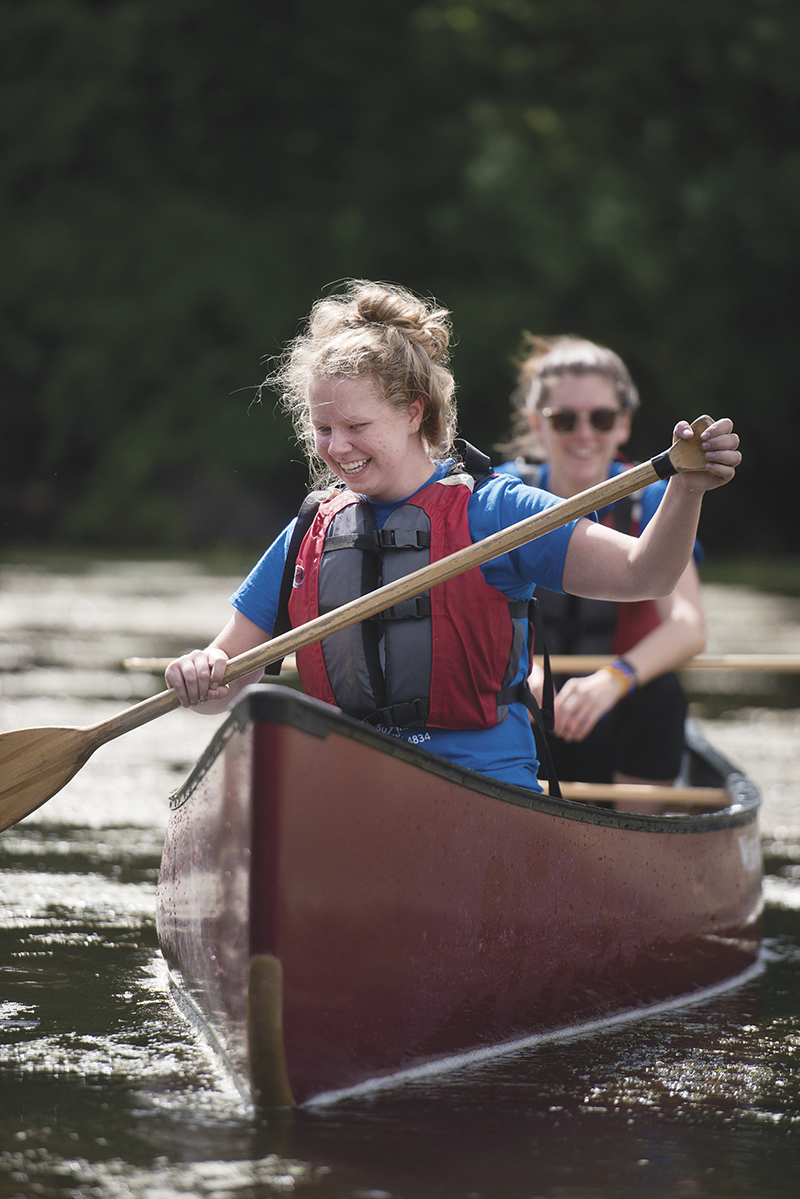