Jon Francis Lamphier left his earthly home to be with his Lord and Savior, Jesus, Thursday, June 15, 2017. He was 62 years old. 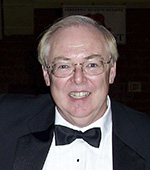 Jon was born on Aug. 26, 1954, in St. Paul, to Thomas and Mallean Lamphier (née Thidemann). He graduated from Mahtomedi High School in 1972 and continued his education at Concordia College in Moorhead, where he obtained his bachelor’s degree in music education. Jon would soon find out that while he loved music, he didn’t necessarily love to teach music! It was then that he would begin his career in radio and TV broadcasting after obtaining an associate degree in broadcasting from Brown Institute. His first job was on the island of Guam, where he worked at a radio station for a year before moving to Bismarck, North Dakota, where he became a news anchor for KXMB TV.

On June 14, 1981, Jon was united in marriage to Jacelyn Schneck in Sheffield, Iowa. The couple was blessed with two children: Priscilla and Natalie. Jon and Jackie would raise their family throughout the Midwest before settling in Albert Lea in 2000. Jon continued his broadcasting career, working for KATE Radio and KIMT TV until he retired in 2008 after 25 years in broadcasting.

Aside from work, Jon enjoyed working on his elaborate O gauge model railroad, cruising car shows in his restored 1968 Chevelle and flying his Beechcraft Bonanza airplane. He was a governor in the Quiet Birdmen Aviation Fraternity and was a member of the Albert Lea Airport Advisory Board, Experimental Aircraft Association, Aircraft Owners and Pilots Association and American Bonanza Society. He also introduced over 100 children to aviation through the EAA Young Eagles program.

Jon also nurtured a lifelong love for music. He played trombone with the Austin Big Band and Albert Lea Community Band, where he served as vice president. He loved singing and playing bongos as part of the worship team at New Life Christian Church, which he faithfully attended for 17 years. His family frequently received free concerts as Jon played one of his many guitars along to albums in the basement. Frankly, Jon sang, whistled, hummed and imitated instruments nearly constantly whether he was walking through the house, riding in the car or sitting in the middle of a crowded restaurant.

But more than any of those hobbies, Jon loved being a dad to his two daughters. Wherever Priscilla and Natalie were, you would find Jon. From picking out tutus and dance recital outfits, to attending all their events and field trips, Jon would always be there. He was a funny and caring person — an outstanding husband and father.

He is preceded in death by both parents; a mother-in-law, Ramona Schneck; and a sister-in-law, Jane Hlavaty.

Funeral services for Jon F. Lamphier will be at 4 p.m. today at New Life Christian Church, Albert Lea, with the Rev. Vern Harris officiating. A light lunch and time for fellowship will follow the service. Visitation was from 4 to 7 p.m. Sunday at Bonnerup Funeral Service in Albert Lea, as well as one hour prior to the service at the church.