The funeral service for Joshua F. Hruza, 19, of Albert Lea will be at 3 p.m. Friday at Bonnerup Funeral Service in Albert Lea. The Rev. John Mitchem will officiate. Friends may visit with family from 11 a.m. until the time of the service at the funeral home on Friday. Interment will be at a later date in Conger Cemetery. 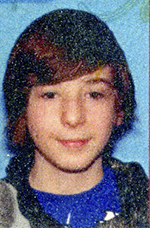 He attended Sibley Elementary School, Southwest Middle School and Albert Lea High School. Josh was a delivery driver for many area businesses, including Hy-Vee, Erbert and Gerbert’s and most recently Godfather’s, to name a few.

His real passion was rap music; he wrote several pieces and loved performing. Put a microphone in Josh’s hand and you could see the joy it brought him. He also enjoyed skateboarding, jogging, free running, lifting weights, tricking and working on cars.

Josh was preceded in death by his baby brother, William; grandfather, Frank Hruza; and his great-grandparents.

Josh’s zest for life and ability to light up a room will always be remembered.