The funeral for Kathleen Popp will be at 10:30 a.m. Friday at Christ the King Catholic Church in Byron with a lunch to follow. The Rev. Paul Surprenantt will officiate. Burial will be at Hillcrest Cemetery in Albert Lea after lunch. Visitation will be from 4 to 7 p.m. today at Byron Funeral Home, 1620 Voll Drive NW in Byron,  and one half-hour prior to the funeral service. 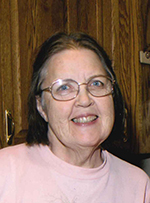 She graduated from Albert Lea Senior High School in 1958. Kathy graduated from Methodist Kahler School of Nursing in the class of 1961. She married Clarion Louis Popp on Aug. 4, 1962, at St. Pius Church in Rochester. The couple moved a few times while Clarion was in the Navy and then settled near Byron, where they raised their four children. In 1984 they moved near Tucson, Arizona, and then moved back to Byron in 1989, where they resided until retirement.

Kathy proudly worked as a registered nurse in Minnesota and Arizona over her career, but mostly she loved being a mom, raising her four children and being around her family. She was a kind and generous woman who enjoyed helping others. She enjoyed canning, sewing, baking and genealogy. Kathy was devoted to her Christian faith and was an inspiration to all. She had a green thumb with her houseplants and vegetable garden. Kathy will be greatly missed by family and friends.

Online condolences are welcome at www.byronfuneralhome.com.