Lake Mills survives Eagle Grove to get back to .500 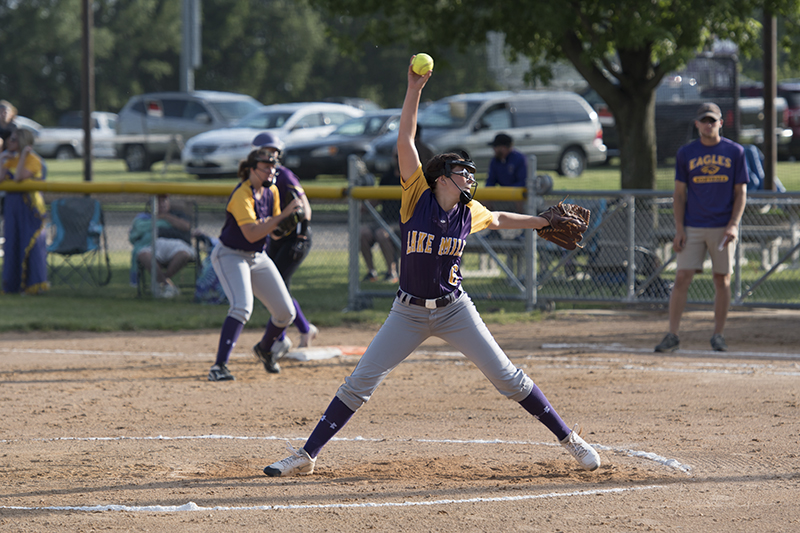 Lake Mills pitcher Jade Gasteiger delivers a pitch during Wednesday’s game against Eagle Grove. She struck out five batters in a 7-6 win for the Bulldogs. Lory Groe/For the Albert Lea Tribune

It wasn’t easy, but the Lake Mills softball team got the job done against Eagle Grove on Wednesday.

Starting pitcher Jade Gasteiger allowed 16 hits, but the Bulldogs got two RBIs apiece from Faith Cox and Hailey Borgmeyer to win 7-6 and move to 11-11 on the season.

“It was a good back and forth battle all game,” Bulldogs coach Matt Daniels said after his team’s win.

Gasteiger finished the game with two hits. She struck out five batters in the circle.

For Eagle Grove, Sarah Wilson finished with three hits and teammate Jarika Eisentrager had a triple and a double.

The win ends a three-game losing streak for the Bulldogs, who had came in winning four of five games before that.

Eagle Grove came into Wednesday’s game stumbling. It had lost five of its previous seven games. After winning its first five games of the season, Eagle Grove’s record now sits at 11-11.

Lake Mills will be on the road against Garner-Hayfield-Ventura on Friday in Garner.