Lakers coach hopes to set players and city up for success 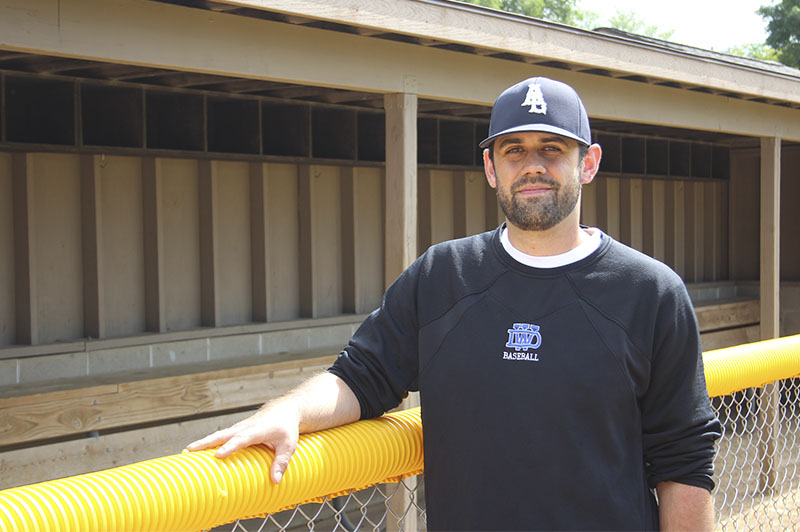 Sam Schumacher, head coach of the Albert Lea Lakers, hopes to provide the groundwork the team needs starting its first year into the second year. Schumacher is a graduate of Dakota Wesleyan University, where he graduated with a master’s in education and administration policies. Tyler Julson/Albert Lea Tribune

The head coach of the Albert Lea Lakers hopes to ready his players for the future, as well as set a good foundation for the newly formed Lakers and Albert Lea.

Born in Fargo, North Dakota, Sam Schumacher, 25, grew up as a fan of all the Minnesota sports teams. Taught by his father, Robert, Sam Schumacher came to love and play many sports through high school, including football, basketball and baseball.

When Schumacher learned of the opportunity to coach in Albert Lea, he jumped at the chance.

“I saw the opportunity to coach in a league like this, coach college and high-level players,” Schumacher said. “Being this close to the Twin Cities and being in Minnesota was something that just felt right.”

Although he mostly played shortstop, Schumacher had experience playing most of the infield in high school and into college. Schumacher attended college and played baseball for the Tigers of Dakota Wesleyan University in Mitchell, South Dakota.

While at Dakota Wesleyan, Schumacher graduated with a bachelor’s degree in sports management and then went on to earn his master’s degree in education and administration policies.

Schumacher became a graduate assistant coach while working towards his master’s at Dakota Wesleyan. He worked with hitters and infielders while coaching and learned that he enjoyed the coaching aspect.

Just like his players, he enjoys spending time with them, helping to mold them into the great people they can become later in life.

Although Schumacher has goals for the team and players in the Lakers’ first year of play, he also wants to help establish a foundation for Albert Lea and the future.

“I want to establish the groundwork of the team going from year one to year two,” Schumacher said. “It’s not always easy, starting a league like this. There’s going to be a lot of hurdles. I want people to see how you can have an entire community vested with the team. I think we’re really starting to understand all that and what it takes to make it happen.”

Schumacher said the reception to the team within the Albert Lea community has been phenomenal. There have been many individuals and businesses that have stepped up to provide a lot of support for the team.

“Everyone has been so great,” Schumacher said. “I live with Randy and Ellen Kehr and they’re amazing. They’ve been so nice and so welcoming with everything. I can’t thank them enough for everything they’ve done.

“People sometimes don’t realize everything that goes on behind the scenes to make something like this work. I could go on and on. There are so many people that have a helping hand in making this a successful summer, not for just the team but the city of Albert Lea as well.”

Lake Mills native to be on ‘Big Brother’ on…