Funeral services for Larry Jacobson of Rochester, formerly of Albert Lea, will be at 11 a.m. Friday at Bonnerup Funeral Service in Albert Lea. The Rev. Nathaniel Schwartz will officiate. Interment will be in Graceland Cemetery in Albert Lea. Visitation will be one hour before the service at the funeral home.

Larry Joe Jacobson was born July 1, 1947, in Albert Lea, the son of Lurlin and Luella (Grinolds) Jacobson. He graduated from Albert Lea High School in the class of 1965. He worked at Pop-Tent and Club 16, before serving his country in the United States Army. 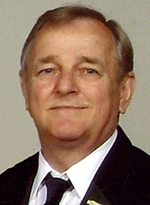 When he returned from the service, he went to work at Streater LLC. Larry met the love of his life, Dianne Johnson, and they were married on Dec. 7, 1968. The couple celebrated more than 48 years together. Larry completed his working years with 40 years for the city of Albert Lea at the Waste Treatment Center, retiring in November 2009.

Larry had been a member of Ascension Lutheran Church, transferring his membership to Trinity Lutheran in Rochester when they moved there a few years ago.

In addition to his family, one of Larry’s greatest passions was golf — he loved to play and teach others. Many special memories were made on the golf course. He especially enjoyed the yearly family vacations to the Brainerd area. He had many interests, which included cars  — old and new — carpentry, woodworking and last but not least, watching Minnesota sports teams. He was an avid Minnesota Twins and Vikings fan —  through the good and the bad. Larry was a “Mr. Fix It,” and his family will cherish the many projects he completed for them, which include decks, sheds, cabinets and workbenches, to name a few.

He was preceded in death by his parents Lurlin and Luella Jacobson; father-in-law and mother-in-law Leonard and Betty Johnson; brother-in-law, Bob Weigel; and sister-in-law, Patty Bendickson.

Larry will always be remembered for his love of family and life, his unselfishness and his long goodbyes.