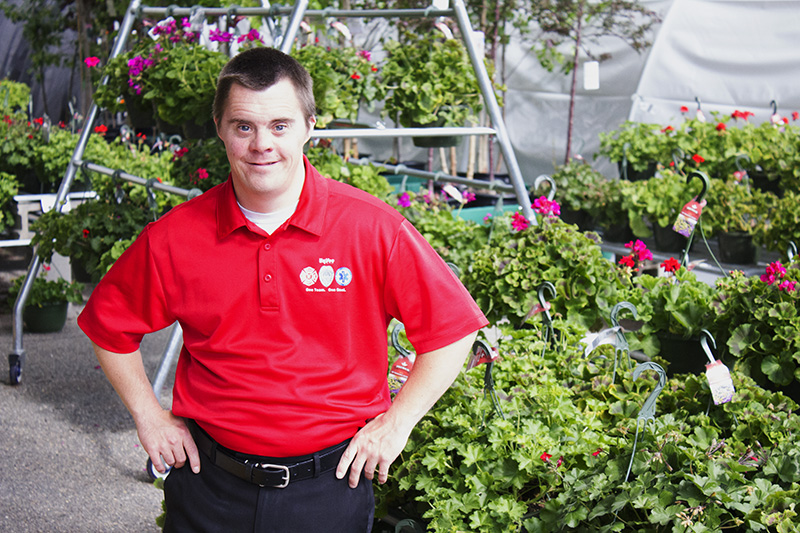 Kellen Kaasa, pictured in his Hy-Vee uniform, was featured in Little Big Town's music video "Happy People" this April. Kaasa has been to an estimated 30 concerts for the band and knows them personally. Evelyn Seffinga/Albert Lea Tribune

Kellen Kaasa, who graduated from Glenville-Emmons High School in 2001, has been to an estimated 30 Little Big Town concerts over the past seven years. Kaasa has worked at Hy-Vee in Albert Lea since his graduation.

“He has been a smile in the aisle for over 14 years,” Kaasa’s mother, Dawn, said.

At 9 p.m. April 1, the Kaasa family received an email from Bobby Simmons, a production manager for Little Big Town. Sim-mons explained that Little Big Town would be shooting its music video “Happy People” in Nash- ville, Tennessee, over the next 72 hours and the band wanted Kaasa to be in it. 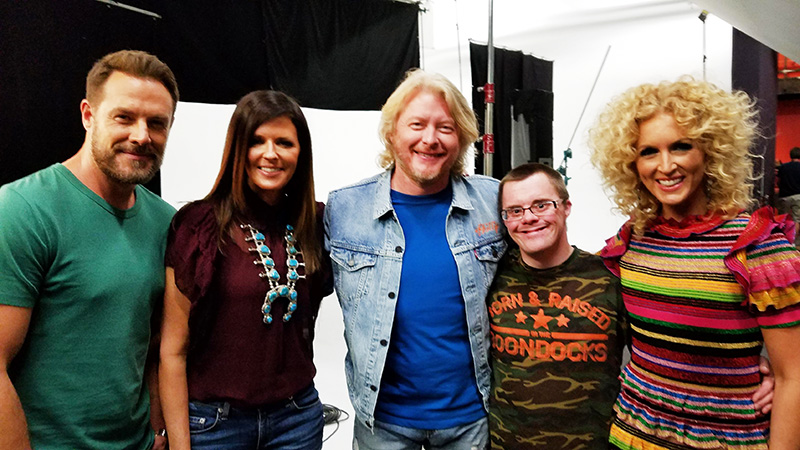 Little Big Town takes a photo with Kellen Kaasa after filming their music video “Happy People”. The band asked Kellen to come to Nashville for the filming. Provided

Dawn and Kellen Kaasa, along with Kaasa’s father, Tim, immediately rearranged their work schedules and packed their bags for Nashville.

“We literally bought our plane tickets on my husband’s phone on the way to the airport,” Dawn Kaasa said.

Kellen Kaasa did not even have time for a haircut before his trip. When the trio arrived in Nashville, Dawn Kaasa found the nearest Wal-Mart to buy a clipper to cut her son’s hair in the hotel room before meeting with Little Big Town and the camera crew the next day.

The family was in Nashville to shoot the music video for a few days. Kellen Kaasa’s portion of the shooting took 20 minutes total and he is in the final cut of the “Happy People” music video for only two seconds — a very proud two seconds, however.

Kaasa said he was not nervous for shooting the music video. He wore his favorite shirt, a camouflage T-shirt that reads “Born and Raised in the Boondocks.

“Kellen even sat in the director’s chair,” Dawn Kaasa said about the experience in Nashville.

Both Kellen and Dawn Kaasa said they had a whole new appreciation for the detail that goes into producing music videos.

Kellen Kaasa said he has shown many people the new music video, including his friends at Hy-Vee. He also said people could vote to see the video on the Country Mu- sic Television channel, and said he has voted for the video at least 50 times.

Kaasa initially got in touch with Little Big Town seven years ago through Dustin Wheeler, a friend who worked as a merchandise manager for the band. Wheeler called the Kaasa family and asked them to come to a concert in Kansas City to meet the new band he had been working with.

Wheeler came up with back- stage passes for the family and introduced Tim, Dawn and Kel- len Kaasa to Little Big Town. Jimi Westbrook, Karen Fairchild, Philip Sweet and Kimberly Schlappman make up the country group.

Dawn Kaasa said the first time that Kellen Kaasa met the band, they had already heard stories about him from Wheeler.

Since meeting Little Big Town, Kaasa has been invited to golf with the group, has played the yard game “cornhole” or “bag boards” with the artists and has been told to go to the back of the line at “meet-and-greet” events
so that the band can spend more time with him. Kaasa has traveled the country with his friends and family to see his friends in Little Big Town.

Over the past five years, Kaasa has brought Special Olympics T-shirts to Little Big Town con- certs that are aimed at spreading awareness for “the R word.”

“Everytime we meet-and-greet (the band), they are all dressed up and beautiful and then they throw those “R word” shirts on over their clothes to support Kellen and promote sales,” Dawn Kaasa said.

Dawn Kaasa said in an email that the members of the band are four of the kindest people she has ever met.

“I can never repay them for how wonderful they make my son feel every time he sees them,” she said.

Watch Kellen Kaasa’s spotlight in “Happy People” by searching Little Big Town on YouTube. He appears in a camouflage shirt at two minutes and 36 seconds into the video.