A Rochester man charged with selling 3.3 grams of cocaine to a Freeborn County Sheriff’s Office deputy in April 2013 was sentenced to more than 2 1/2 years in prison on Thursday in Freeborn County District Court.

Ukash Ali Abdulle, 30, was sentenced after he pleaded guilty to fourth-degree drug sale in October. He was given credit for more than 13 months served, and he will serve his sentence concurrently with three prison sentences he has received in Olmsted County. 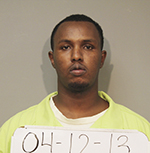 Abdulle and Bashir Abdullahi Farah each faced one count of second-degree drug sale for a sale of 3.3 grams of cocaine on April 12, 2013.

Court documents state the sale took place in the undercover deputy’s vehicle in the parking lot of Knights Inn in Albert Lea. The drug solds for $1,000.

Members of the South Central Drug Task Force pulled the men over in their vehicle shortly after the sale and arrested them.

Farah was sentenced to nearly 2 1/2 years in prison in February after he pleaded guilty to fourth-degree drug sale in January, which will run concurrently with a seven-year prison sentence he received in Olmsted County in a separate case. He was given credit for nearly three years in prison he has already served on the Freeborn County file.