Man found with stolen safe gets 5 years for meth possession

Joshua David Scott, 29, was sentenced after he pleaded guilty to second-degree meth possession. He received credit for 272 days served. 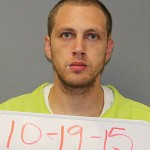 Court documents state Scott was charged after officers were initially alerted to the vehicle Scott and Jessica Sue Iverson, 30, of Northwood were riding in Oct. 19, 2015, in the Burger King parking lot in Albert Lea, because it matched the description of a vehicle tied to Scott — who had active warrants, according to court documents.

Officers reportedly found a butane torch in the vehicle and a large safe in the backseat. The safe had reportedly been stolen from somewhere in Lake Mills.

Court documents state police found a meth pipe in Iverson’s purse and a purse in the backseat belonging to Scott with about 8 grams of meth inside.

Scott reportedly admitted to police that he had a baggie of meth in his pocket when searched and that when he was told to turn around, he concealed the bag in his hand and then put it in his mouth in the back of the squad car.

Court documents state Scott told police he and Iverson had taken the safe to pay for a trip to California.

Scott was charged with fifth-degree meth possession and receiving stolen property, but those charges were dismissed. His expected release date is Sept. 29, 2021.

Iverson was placed on supervised probation for up to five years in March 2016 in connection with the case after pleading guilty to fifth-degree meth possession two months prior.

Man pleads not guilty in stabbing of 3 in Albert Lea