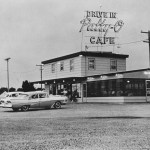 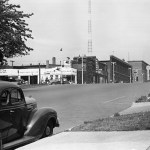 A Mobile gas station is on the left next to the Aragon Cafe. This 1941 photo is looking north on South Broadway, at the intersection with Pearl Street. Photo courtesy Freeborn County Historical Museum 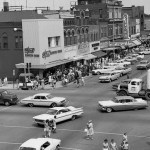 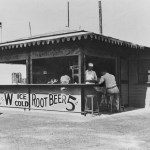 The A & W Root Beer stand was at South Broadway and Seventh Street. Hamburgers sold for 20 cents, and a ice cold root beer for 5 cents in this 1946 photograph. Photo courtesy Freeborn County Historical Museum 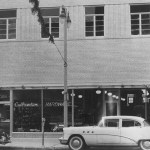 This photo was taken about 1954 of Gulbrandson Hardware, 314-16 S. Broadway. During remodeling, the street entrance to the second floor was closed. The space was later used as a popcorn and candy stand. 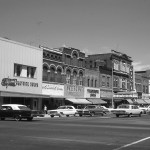 Drive-in restaurants and theaters popped up as cars evolved from a simple mode of transportation to a source of recreation and enjoyment. Several drive-in restaurants populated this area. The 1959 Albert Lea telephone directory lists the A&W Root Beer stand, Dee’s Drive-In, Dixon’s Drive-In, Patty-O Drive-In and Ron’s Drive-In. The Starlight Drive-In Theater made its appearance in  July 1948.

Teenagers especially enjoyed showcasing their cars and meeting friends during their weekend drives up and down Broadway. This ritual goes back to the 1950s. Some refer to it as cruising Broadway, others as dragging Broadway. The route was the same. Drive south to Seventh Street, turn around and head north on Broadway to Fountain Street, and then do it all over again. Stopping to talk with friends, enjoying a snack from Merrill’s Popcorn Stand or catching a movie were all part of the experience. The businesses along Broadway provided gas, food, shopping and entertainment for everyone.