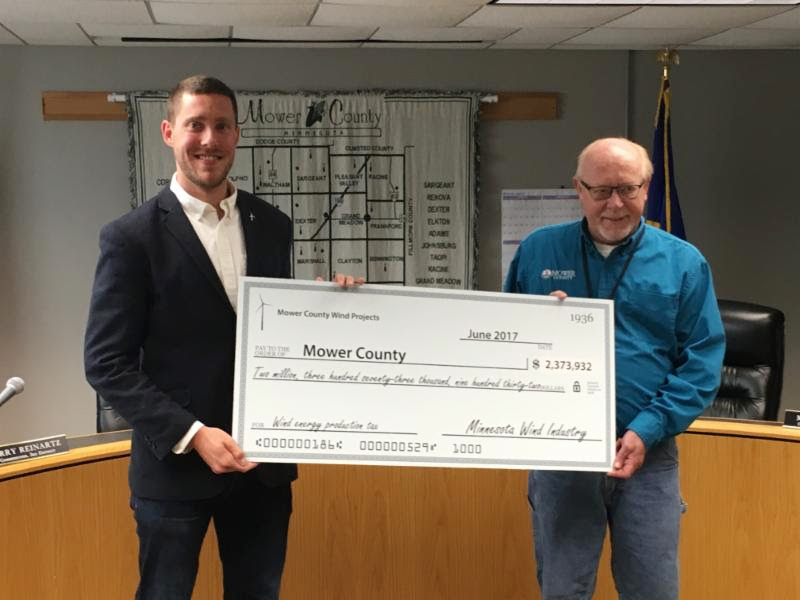 Chris Kunkle of Wind on the Wires presents a check to Commissioner Tim Gabrielson that represents more than $2.3 million in wind energy production tax revenue for 2016. - Provided

Representatives from the wind industry and Xcel Energy recently presented a ceremonial check to Tim Gabrielson, chairman of the Mower County Board of Commissioners, representing  more than $2.3 million in wind energy production tax revenue for 2016.

The check represents the largest wind energy production tax payment made to any one county in the state, and is a 26.5 percent increase over last year’s payment.

According to a press release, statewide, revenue from the wind energy production tax exceeds $12 million.  More than one-quarter of the counties in the state benefit from this source of revenue.

“Minnesota is truly a leader in renewable energy in the Midwest, and Mower County is reaping the benefits of that leadership. The county has received over $14.8 million in wind energy production tax payments since 2007,” said District 27 Sen. Dan Sparks, DFL-Austin, said.

“That revenue helps our entire community, because it helps keep the lid on property taxes, helps pay for road improvements and supports community projects. We need to continue supporting wind energy development in Minnesota.”

“More wind energy is produced in our county than anywhere else in the state, and that has been a good thing for Mower County,” Gabrielson said. “Not only does this economic development benefit local landowners and businesses who have partnered in the wind projects, our entire community benefits from the production tax revenue received by our county. This last year, the county board committed $400,000 of the county portion of revenue from the wind energy production tax toward improving roads and bridges. We’ve used the remainder as a tax relief for citizens. Having this new revenue source from wind power reduces the amount of tax dollars that would be needed to be raised from taxpayers to pay for our county operations.”

Currently, Minnesota ranks in the top 10 in the nation for installed wind capacity and percent of total state electric generation from wind.

“The wind industry supports over 100,000 workers across the U.S. and in all states, including thousands here in Minnesota. Wind is home to the fastest growing job in the country, and each turbine creates more than 30 jobs throughout the course of its life.  It’s really rewarding to be part of this thriving energy economy and part of an industry growing nine times faster than the overall U.S. economy,” said David Easler, Vestas senior operations manager, upper Midwest.

The wind industry has invested $6.8 billion into Minnesota’s economy. With 3,499 megawatts of installed wind capacity, wind power now provides 17.7 percent of Minnesota’s electricity. Another 906 megawatts of wind are under construction, or in advanced stages of development in Minnesota.

“Wind energy is a true success story for Minnesota, providing investment, revenue, and jobs across the state” said Chris Kunkle, regional policy manager for Wind on the Wires.

“The cost of wind energy has declined 66 percent over the past seven years, and utilities like Xcel Energy are passing those savings along to customers. This year, for the first time, the revenue from the Wind Energy Production Tax exceeds $12 million. Cumulatively, over the past 10 years, the wind industry has paid more than $78 million in production taxes. More than one-quarter of the counties in the state benefit from this revenue source, predominantly in Greater Minnesota, where the jobs and economic development are needed most.”