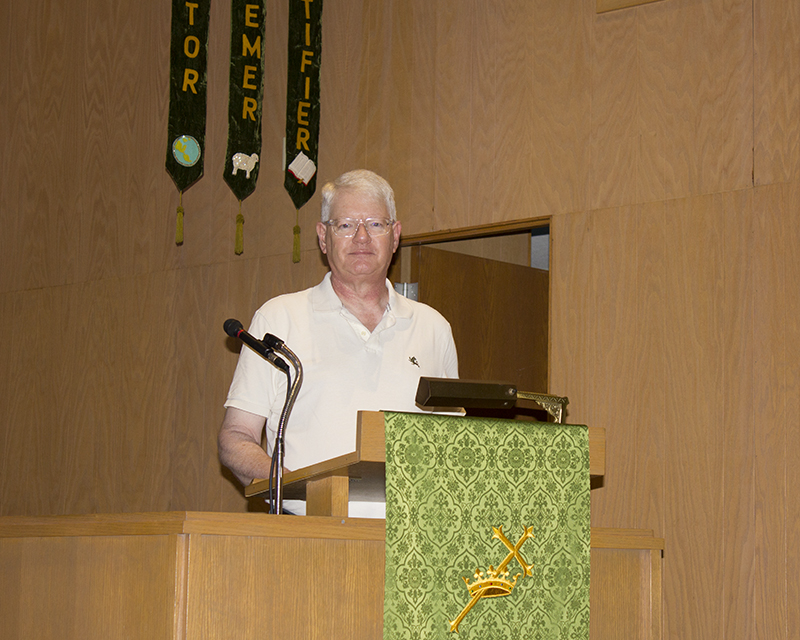 A pastor of 36 years is continuing his career at Cross of Glory Lutheran Church and West Freeborn Church in Hartland.

Steven Schwartz has been a pastor in a few different states throughout his career. His first call was in western Pennsylvania, where he was the pastor in two different churches for four and a half years. He was called to southern Minnesota for seven and a half years, and then to Roland, Iowa, for 11 years. Before coming to Hartland, he was a pastor in Randolph for 13 years.

Schwartz decided to become a pastor during his first year at Concordia College in Moorhead. He remembers going to a Youth For Christ rally with a friend as a senior when he wasn’t very involved in church or religion. He called it a conversion experience.

After he moved out of the house for college, he said he felt God wanted him to do something in his life that was about more than just making money.

“It was just something that I couldn’t escape,” Schwartz said. “So it was really just that sense that God started something back when I was a senior in high school that lead to my saying ‘Alright I’ll become a pastor.’ It wasn’t something that I just jumped up and down and got excited about. It just seemed like that was the thing to do.”

He wanted to become a pastor because he wanted to do something with his life that would be helpful to other people, Schwartz said. His favorite thing about being a pastor is the opportunity he has to work with children. He likes to teach and loves the energy, enthusiasm and imagination he gets while working with them

He said his plans for the church is to get more children involved, to make people excited about the ministries they are doing and to have people enjoy church again.

Throughout his career, Schwartz has accomplished a lot at different churches, including starting a hospice program in southwest Minnesota.

“I think what I feel like I have accomplished is helping congregations feel like they have a future and helping them navigate through difficult situations,” Schwartz said.

Being new in Hartland, he hasn’t been involved a lot in the community aside from a few community events. In the future he hopes he will have the opportunity to be more involved in the schools, he said. When he was a pastor in Iowa he was a part of the crisis intervention team, which is when a child dies or something along those lines happens, he and other pastors would go and help people in crisis, and he is hoping he will have an opportunity like that in the Hartland area.

“It is nice to be someone who gets called on,” Schwartz said. “To be an outsider coming into a situation where things can be kind of tough for those who are (intense) all the time, and then you come in and try to defuse and listen and calm things down.”

After being a pastor for 36 years, Schwartz wanted one more challenge before retiring, which is to revitalize one more church. He said he has accomplished a lot at his previous church in Randolph, and it was either to muddle along until he retires, or have one more challenge.

“I have a tendency to be a pastor who goes into churches and kind of revitalizes churches,” Schwartz said. “So I am looking to revitalize one more church before hanging up.”

Interesting fact: he once played mandolin with the Fargo-Moorhead Symphony Orchestra