Funeral services for Ronald R. Gonzalez Jr., 37, of Burnsville and formerly of Albert Lea, will be at 2 p.m. Friday at St Theodore Catholic Church in Albert Lea. The Rev. Eugene Stenzel will officiate.  Interment will be in St. Theodore Cemetery. Visitation will be from 5 to 8 p.m. on Thursday at Bonnerup Funeral Service, and one hour before the service at the church. 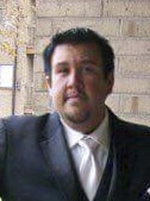 A life-changing car accident in 2012 left Ronald with many physical challenges and much pain. His family and friends lost Ronald unexpectedly, as he succumbed to his injuries, on Wednesday, June 14, 2017, at his home in Burnsville.

Ronald graduated from Albert Lea High School with the class of 1999. He continued his education and attended culinary school in Minneapolis and also MCTC, receiving his IT degree. He had been a leasing consultant in the metro area.

Ronald had many passions, with cooking being at the top of the list. Outdoor concerts, football, movies, celebrating Christmas and other holidays, watching horror flicks and vacationing all brought much joy to his life. Socializing, being surrounded by family and friends, was what meant the most to Ronald.

He was preceded in death by his sister Jamie in infancy; his grandparents Richard Ramirez, Elias and Bonnie Gonzalez, Stan Johnson; uncles and aunt: David Ramirez, James Gonzalez and Mary and Chris Colby.

Ronald’s family was everything to him — they were his world, and what got him through the difficult journey since his accident. They will all miss him beyond measure.