Sentencing has again been rescheduled for the man found guilty of murdering another man last summer at Myre-Big Island State Park.

David Michael Easter, 27, is scheduled to be sentenced Sept. 15. He has been in jail since he was found guilty of second-degree murder in April in the shooting death of Spencer Daniel Brown, 23, last summer. Easter will be incarcerated until he is sentenced. 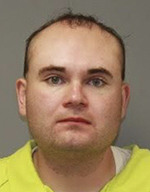 Freeborn County Attorney David Walker said Judge Steven Schwab delayed sentencing Wednesday because of a scheduling conflict. Sentencing was delayed until August earlier this month, based on what Schwab said was the serious nature of the charge, the presumptive sentence Easter faces and the difficulty the defense has faced in gathering the information needed for a departure motion.

Easter was found guilty of intentionally killing Brown on Aug. 23, 2016, at Myre-Big Island State Park. Easter had claimed self-defense in the man’s death. He was convicted after a jury trial.

Easter faces a presumptive sentence of more than 25 years in prison.