Steven Dale Vogelsang, 63, of Owatonna died Saturday, June 24, 2017, surrounded by family at his home. Friends may greet the family from 5 to 7 p.m. Friday at Brick-Meger Funeral Home, 1603 Austin Road in Owatonna. Burial will take place at Hillcrest Cemetery in Albert Lea.

Steve was born Feb.  23, 1954, in Albert Lea to Rudy and Cleone Vogelsang. After attending school in Ellendale, Steve was united in marriage to his high school sweetheart, Kathy Bonnerup, on Nov. 24, 1973. He began his military service shortly thereafter with two years of active duty based out of Fort Leonard Wood in Missouri. He then returned to Albert Lea with his wife and son. Steve enlisted in the Minnesota National Guard and attended Albert Lea Vo-Tech as his family grew to include two daughters. A hardworking man, Steve had a long career in printing and manufacturing that included 20-plus years with Brown Printing Co. and over 10 years with SPX. 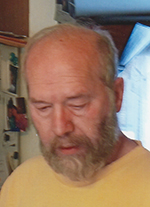 Steve, a loyal and excitable fan of both the Minnesota Vikings and Twins, filled his free time with family activities. He adored spoiling his granddaughters and helping his brother, Dennis, on the farm. He had a once-in-a-lifetime trip to Germany with brothers David and Dennis and enjoyed his mother-in-law’s home cooked meals and desserts, which always seemed to stick together.

Steve is survived by his wife, Kathy; son, Jason, and his fiancee, Jen; daughter, Stacy, and her husband, Robert; step-granddaughter, Scarlett; granddaughters Kailyn and Devyn; step-great-grandchildren Bayleigh, Rylee and Cayden; mother-in-law, Velma Bonnerup; brothers Dave and his wife, Judy, of Fargo, North Dakota, and Dennis of Clarks Grove; sister, Carol of Trimont; as well as many nieces and nephews.

Steve was preceded in death by his parents Rudy and Cleone; father-in-law, Don; brother, Bob; and daughter, Kristi.

Steve will be sadly missed by his loving family and friends. To leave a message, go to www.brick-megerfuneralhome.com.