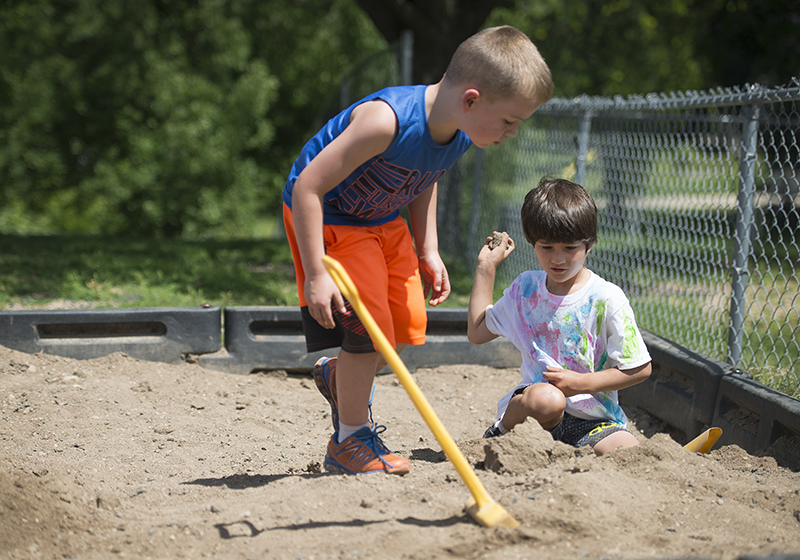 Children play in a sandbox Friday at The Children's Center in Albert Lea. Albert Lea Area Schools is partnering with the center for a voluntary pre-K program. - Colleen Harrison/Albert Lea Tribune

Albert Lea Schools, The Children’s Center will partner for pre-K

“We are kind of two different entities, but we are going to be co-located together and then it will give parents just another array of options and opportunities to be able to access childcare and then get their preschool through this voluntary pre-K program,”  said Jennifer Hanson, coordinator of early learning for Albert Lea Area Schools.

The collaboration will result in a relocation of the voluntary pre-kindergarten program from the previous location at Hawthorne Elementary School to The Children’s Center location on James Avenue. 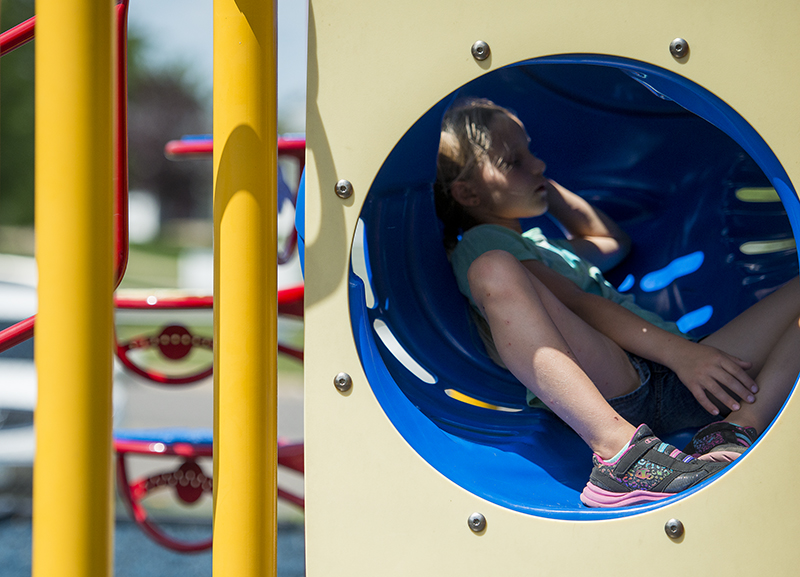 The collaboration will result in a relocation of the voluntary pre-kindergarten program from the previous location at Hawthorne Elementary School to The Children’s Center. – Colleen Harrison/Albert Lea Tribune

“We are very happy to be able to partner with them and excited for all of the opportunities that will be available for young children and families this upcoming school year,” Hanson said.

On July 1, 2016, the Albert Lea school district applied for the voluntary pre-kindergarten program. After the credit and application process, the district was awarded enough funding to be able to provide for a morning and afternoon session in three classrooms. Last year, two preschool classrooms were located at Halverson Elementary School and one preschool classroom was located at Hawthorne.

The previous classroom for the school district at Hawthorne was filled with new materials, furniture and equipment only one year ago. The Hawthorne classroom will be emptied and the almost-brand new materials will be moved across town into the Kids Club room at The Children’s Center.

Once the voluntary pre-K funding was received last year, Hawthorne converted a computer room into a preschool classroom to create space. This action was made possible through the purchase of Chromebook laptop computers in the school district — creating a more flexible and mobile computer lab.

The school district was forced to pull away from the proposed 2016 partnerships because the rules for the application would not support the collaboration.

The story was different this year.

Hanson said different stakeholders in the decision process — such as the Minnesota Department of Education and the Minnesota Legislature — had asked for the school district’s opinion on the voluntary pre-K program. The stakeholders asked the district for input in how the program was developing, which things were going well and which things could be improved upon.

Hanson said one major criticism the school district brought to the table was that the Minnesota Department of Education has always pushed for mixed delivery systems — such as the partnership between early childhood education and The Children’s Center — however, set rules in the application process did not allow for such collaboration.

Whether or not the stakeholders listened to concerns of the district, Hanson said the 2017 application came out and will now allow more flexible mixed delivery collaboration within community partners and school districts.

The revisions to the application process for grant funding are now allowing the entities involved to be able to utilize wasted space in the community and become more efficient. 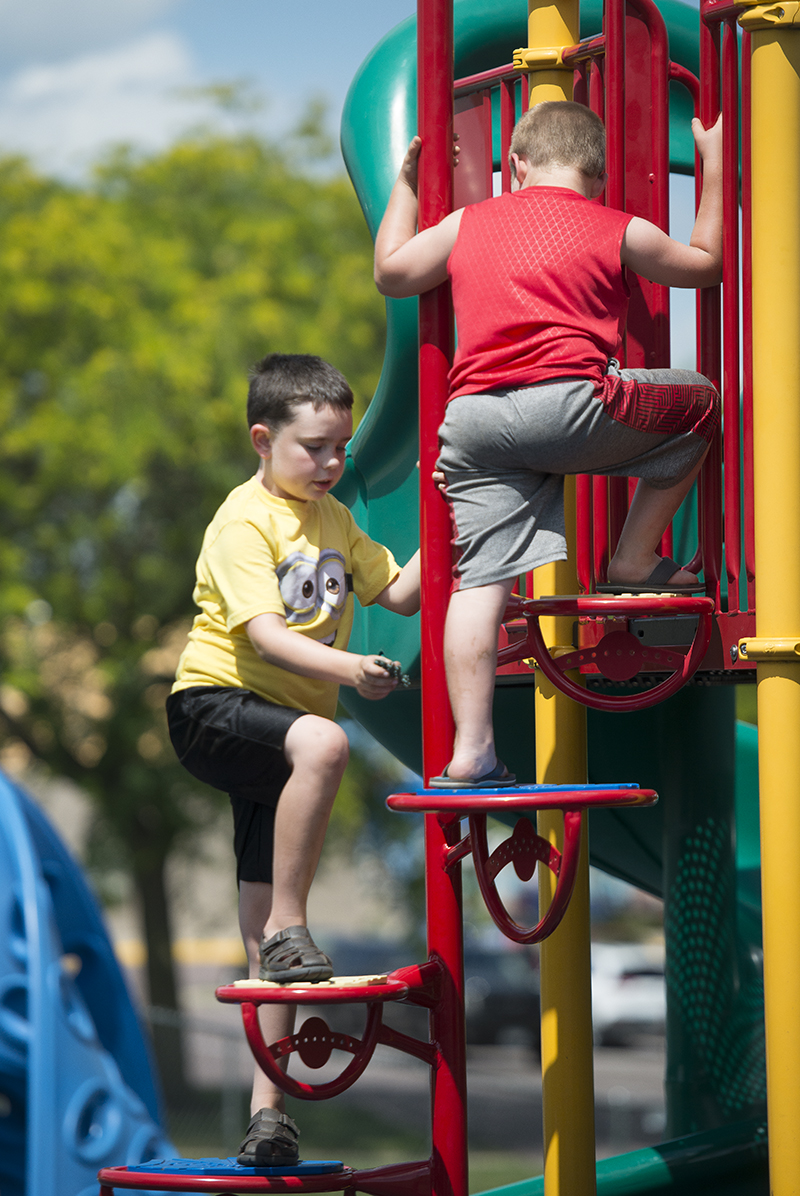 Children play on a playground Friday at The Children’s Center in Albert Lea. Albert Lea Area Schools is partnering with the center for a voluntary pre-K program. – Colleen Harrison/Albert Lea Tribune

“Basically, we have a room that is designated — we call it our Kids Club room — so that is for school age children,” said Sue Loch, director of The Children’s Center. “We have kids come as early as 5:30 a.m. and we feed them breakfast and they are here until the bus picks them up to go to school during the school year, so the room is empty all day until they come back at 3:05 p.m. So, it really is kind of a great thing that we are going to utilize that room.”

Both ends of the partnership are looking forward to the collaboration, and all of the preschools in Albert Lea use the same curriculum and assessment for educating.

“We don’t have kids that are entering kindergarten from a different experience, usually, because they have all had similar experiences with the curriculum,” Hanson said. “And that doesn’t happen a lot in communities. Usually, people kind of pick and choose their own thing, so that is an advantage.”

Aside from  the educational benefits of the voluntary pre-K program in Albert Lea, both women remarked on the importance of the social and emotional benefits children receive when exposed to the preschool atmosphere.

The Minnesota Legislature approved a permanent continuation of grants in 2017, including the Compensatory Education Pilot grant and also the Voluntary Pre-Kindergarten grant, which were included in the school district’s original 2017-18 budget. These grants are now considered ongoing, meaning they will not expire.

In June, Deputy Superintendent of the Albert Lea Area Schools Lori Volz said that only a handful of districts receive these grants.

Besides the unused space, the collaboration is filling an economic gap between the two organizations. Loch said she is now able to fill spots at The Children’s Center that may not have otherwise been filled.

“It just seems that it couldn’t be a better fit,” she said. “It just makes sense — I just don’t see anything except win-win.” 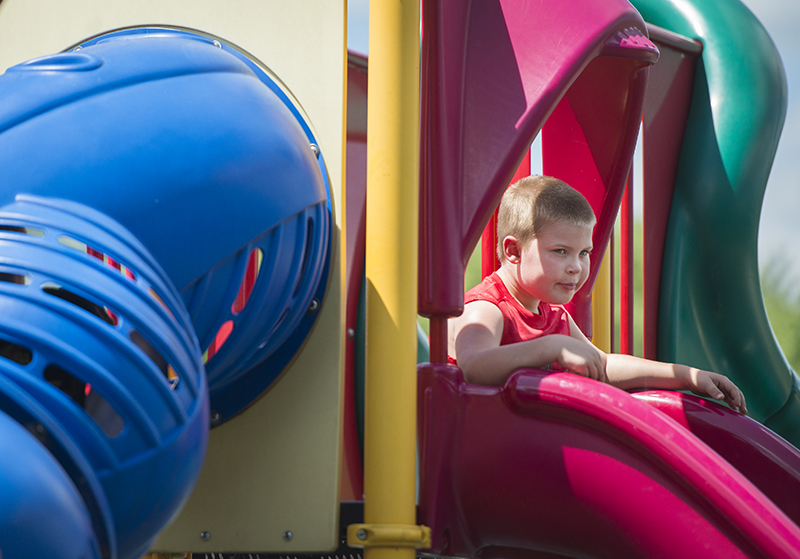 The collaboration will result in a relocation of the voluntary pre-kindergarten program from the previous location at Hawthorne Elementary School to The Children’s Center. – Colleen Harrison/Albert Lea Tribune