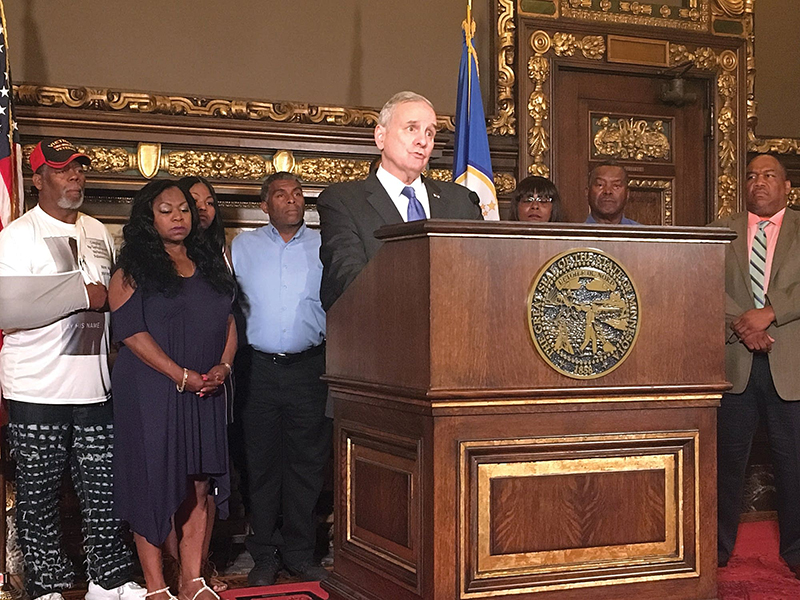 After a private meeting Friday with police leaders from around the state Gov. Mark Dayton addressed sharp criticism from police unions about comments he made on the anniversary of Philando Castile’s death Thursday.

When Castile was fatally shot by a St. Anthony police officer Jeronimo Yanez during a traffic stop last year, Dayton publicly doubted that the black man’s fate would have been the same if he were white. Dayton defended the remark Thursday and said the evidence in the case is clear that race was a factor in the stop.

“Yes, I stand absolutely by that,” Dayton said. “That doesn’t mean Minnesota police officers are racists. It doesn’t mean everyone is involved in racial profiling. It means in this particular instance that’s what precipitated the particular encounter.”

A jury in June found Yanez not guilty of manslaughter and other charges tied to the Castile shooting.

Five police unions blasted Dayton as fueling divisions between people of color and law enforcement. They also railed this week against his recommendation that a new police training fund bear Castile’s name, saying if anything it should pay tribute to an officer killed in duty.

After his Friday meeting, Dayton said he regretted that his earlier remarks were construed as criticism of police.

“I’ve said again and again and I’ll repeat again today, I have the utmost respect and admiration for law enforcement throughout Minnesota,” he said. “They keep our citizens safe. They put their lives on the line every day and night to protect the rest of us.”

Dayton said the response reflects the difficulty of having candid conversations about policing and race at a time when emotions are still raw from fatal encounters.

Dayton also commented on the backlash over his recommendation that a police training fund bear Castile’s name.

“I made the suggestion. I don’t want that to become the focal point of what I’m trying to do here, which is this being one of several meetings over the last couple of weeks to meet with people, different stakeholders to get their perspective about how to go forward.”

That decision about the name of the fund will ultimately rest with the Minnesota Peace Officers Standards and Training Board, which is due to hold its next meeting in about two weeks.

St. Cloud Police Chief Blair Anderson was in the Friday meeting, which had been scheduled earlier and didn’t dwell on the controversies.

“Well, there was no animosity at that table, I can tell you that. Were the issues discussed? Of course.”

“It was less about questions necessarily as `Where do we go from here? How do we make sure that we are more responsive to our communities?’ He listened to the things that a lot of us our doing that are working. And he took copious notes. So, I feel very good about what went on in there.”

Dennis Flaherty is the recently retired executive director of the Minnesota Police and Peace Officers Association. He was there with his successor.

“It was just an exchange of ideas. I don’t think there was anything revolutionary decided.”

Flaherty said there was brief discussion about the proposal to put Castile’s name on the training fund.

“I think it’s fair to say the law enforcement community is not supportive of that and there isn’t any nexus between the police training fund and Philando Castile.”