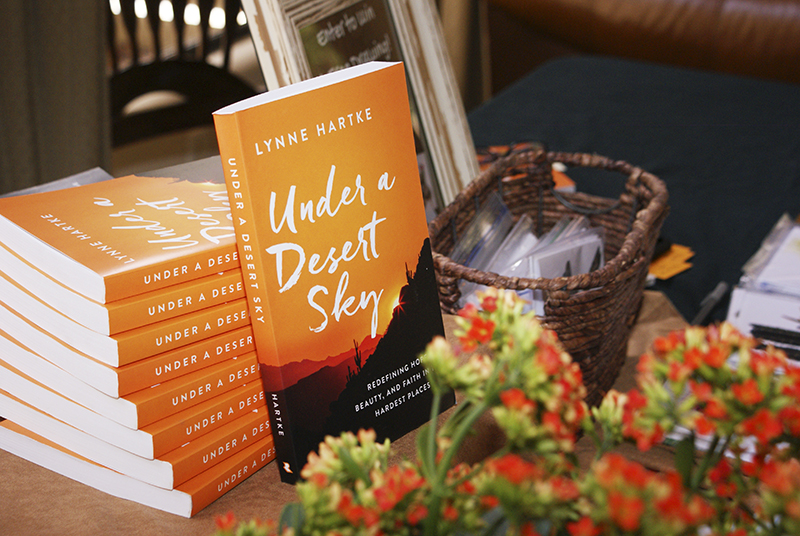 A stack of Lynne Hartke’s book “Under a Desert Sky” is pictured at a book signing earlier this year. -Submitted

Five years after her own cancer diagnosis, one year after her father died of cancer and three months after losing her mother to cancer, Lynne Hartke began to write down her story.

“I started writing as a way of processing the trauma and grief of losing both parents in such a short window of time,” the Albert Lea native said. 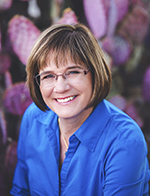 Book signings for Hartke’s new book, “Under a Desert Sky,” and the Relay for Life of Freeborn County will bring the author back to Albert Lea next weekend.

Her book, subtitled “Redefining Hope, Beauty and Faith in the Hardest Places,” tells her story as cancer threatens her own life and the lives of her parents. Hartke invites readers to relate to her journey by using the desert as an analogy during her healing process.

Hartke grew up in Albert Lea, attending school in the Albert Lea School District from start to finish. She went on to work with a mission organization in northern Minnesota called Oconto. The mission worked among the Cree people in Canada.

Hartke met her husband, Kevin, while working with the mission group. The pair stayed with the group for five years and moved to Arizona in 1985.

Her battle with breast cancer began with a diagnosis in May 2009.

Hartke is the daughter of Stanley and Lois Hankins. Her father began teaching in Albert Lea in 1960. For most of his career, he taught middle school and ninth-grade English. Stanley Hankins taught in the Albert Lea School District for 35 years. Hartke remembers her father teaching at Brookside, Southwest and the high school.

“A lot of people remember my dad,” Hartke said.

Hartke’s mother also taught in Albert Lea at what is now known as Riverland Community College. She started out teaching typing and secretary classes and was eventually asked to head the medical transcriptionist program.

Stanley Hankins died May 28, 2013, at the age of 77 after a fight with metastatic melanoma.

“My oncologist fired me — declared me done with all treatments, tests and appointments — in December of 2014, after my parents’ deaths. I wanted so much to be able to call them with the news,” Hartke said.

Hartke’s parents lived in Albert Lea from 1960 until her father’s death in 2013. They went to chemotherapy together, she said.

“They were very involved with the community,” she said.

She said the Youth for Christ building in town has an inscription near their bike rack to honor Hartke’s father because he provided bikes to the community for many years.

“I remember when my mother had the 911 call — when my mother was diagnosed with death — she was so relieved when the people who came to tend to her had my dad as a teacher,” Hartke said. “And I thought, you know, ‘I don’t know what prepositional phrases have to do with medical conditions,’ but that is just the way it is — to be known — that is what was so powerful for her.”

Hartke said when her parents were diagnosed with cancer, they wanted their children to hear what was important.

“The lesson that I learned from my mom, was kindness and grace under pressure,” she said.

“She used to welcome doctors into their own exam rooms. I remember one of the receptionists at the clinic in Albert Lea when I brought mom there for a procedure. After they took mom back, the receptionist came out and talked to me and my sisters and said, ‘you know, I have been angry at God for a really long time — watching your mom deal with her medical issues, and also at that time, my dad’s medical issues,’” she said, ‘I need to relook at my feelings about God.’”

Hartke said her father was always telling jokes to the doctors and embodied the saying, joy is a good medicine. Her parent’s faith played a role in the grace in which they fought cancer.

“People would ask him how he was doing with cancer, and he would always say, ‘I will live until I die, then my real life will begin,’” she said.

The Hartkes live in Chandler, Arizona. Together, they have four grown children and three grandchildren — all of who live within 150 miles of them.

Kevin Hartke is the vice mayor of the city of about 275,000 people. He has also been a pastor in the same parish for more than 30 years.

Lynne Hartke said her parents spread deep roots during their lives — something she said she and the rest of her family learned to do from her parents.

“They were very involved with the community,” Hartke said.

Lisa Hankins Malmstrom and Renae Hankins Roerhs will attend the Relay for Life and the book signing event. Hartke said she and her sisters would love to connect