Albert Lea gets a Freedom Rock-like tribute to national heroes 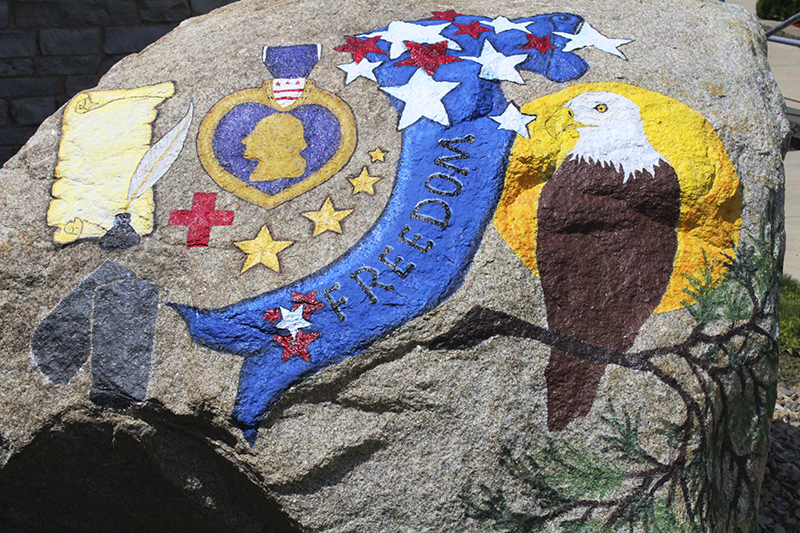 Painting begins on the unnamed rock on display in front of the Freeborn County Historical Museum, Library and Village. The rock is indicative of the history in Freeborn County and is expected to be completed by August. Evelyn Seffinga/Albert Lea Tribune

A large donation has been made to the Freeborn County Historical Museum, Library and Village this spring — and heavy, too.

This spring, a farmer living north of Albert Lea sought use for a nearly eight-ton boulder on his land. The 6-foot-by-6-foot rock has been placed in front of the museum on Bridge Avenue in Albert Lea.

The contribution has spiraled into a collaboration project between the Freeborn County Historical Society, area businesses and individuals in Albert Lea.

Norm Fredin, the outgoing manager of the Freeborn County Fair, brought the idea to the museum this spring after being inspired by Iowa’s Freedom Rocks. Similar projects have been completed, including large-scale patriotic murals by artist Ray “Bubba” Sorensen II across Iowa counties.

“We wanted to put our own little spin on it,” said Kim Nelson, executive director of the Freeborn County Historical Society.

The historical society decided to place the rock by the flag in the front of the building and honor local heroes.

Although a name for the rock has not been decided upon yet, the museum hopes the rock will become a patriotic, honorable landmark for visitors and natives of Albert Lea.

Nelson said the museum hopes to hold a contest for the community to help name the rock once the project is complete.

The overall plan is to cover the rock in murals and imagery representing the Freeborn County community. The goal of the museum is to depict local heroes through paint. The local heroes included in the murals have not been decided upon yet, Nelson said.

Mark Olson, a barber by trade, is the artist painting the rock. Olson is from Albert Lea and works at Skyline Mall Barbers in town.

Although the museum has communicated some parameters to the artist, Nelson said Olson has “full freedom” when deciding the appropriate imagery to be painted on the rock in Freeborn County.

“The artist has used (the museum’s) research library, so that has been awesome,” Nelson said. “(Olson) is gathering information from our librarian and our staff about different periods and who is noteworthy during those periods. Col. Albert Lea would be a fun one to have on there, but we were even thinking of including someone that people can actually relate to within the last century.”

Olson has studied many examples of similar rock projects.

The museum rock’s journey to town began earlier this spring when the rock was removed from a farmer’s field and placed in a grove until a plan was made about what to do with the rock.

Because of the many donations of time, resources, money and talent, the rock project will be of no cost to the local museum.

“As a nonprofit (organization), that is awesome anytime we can have partners like that,” Nelson said. “All of the labor and all of the materials and everything is being donated.”

“It was for a good cause,” Wangen said.

The farmer wished to remain an anonymous donor of the rock that was on his land.

Fredin acted as a donor and a partner in this spring’s rock project at the museum. Fredin has donated funding for footings and pavement to surround the rock once the painting is completed.

Once painting is complete, the museum will contract pavers to create a walkway around the flagpole and rock. Next, a placard will be placed next to the rock explaining the purpose of the tribute rock. The museum hopes to surround with seating and lighting to make the area into a destination in Albert Lea.

Nelson said the painting of the rock will hopefully be done in early August — just in time for visitors of the Freeborn County Fair.

Nelson made it clear that the project is specific to the museum and historical society, despite the partnership and close proximity in location to the Freeborn County Fairgrounds.

“One of the things that I think people are always looking for something to say, ‘Oh, did you see that in Albert Lea — Clear Lake — wherever?’ or ‘Did you see that rock?’ That is what brings people to town,” Nelson said. “A lot of what we do here at the museum is really about connecting and preserving the history of Freeborn County — connecting past to present day — so I think (this project) represents sustainability, that we are going to be here and it is just another thing that people can come see.”

Nelson hopes the project will contribute to the economic sustainability of Albert Lea by drawing people to town through the new landmark. She said if people were given another reason to come to Albert Lea, they are more likely to get gas here, eat here or possibly stay overnight here.

“Businesses might come here because quality of life is high here,” Nelson said.

The museum and library are open all year but the village is only open May through September. Regular hours for the three entities are 10 a.m. to 4 p.m. Wednesday through Saturday.

The city of Albert Lea Parks and Recreation Department will partner with the museum from 9 a.m. to noon July 22 for an event that makes Civil War history come to life. Those attending the free event will learn about important events leading up to the war, costs of war and a day in the life of a soldier. The event will be at the Freeborn County Historical Museum and is open to the public. The event is specifically designed for older elementary school-aged children, but whole families are invited, Nelson said. The re-enactment was made possible after the museum received a grant.

The history of downtown Albert Lea will be featured in July, August and September in preparation of a Historic Preservation Committee conference planned for this fall in Albert Lea.

A window facing Bridge Avenue at the museum has been redone for Eddie Cochran Weekend, and a number of displays on Cochran and fellow Albert Lea native Marion Ross will continue to be on display.

Agriculture displays will continue to be featured in the village and in the museum.