Funeral services for Alice Godeke, 92, of Albert Lea will be at 2 p.m. Thursday at Hollandale Reformed Church. The Rev. Neal Ooms will officiate. Interment will be at Hollandale Cemetery. Visitation will be one hour prior to the service at the church on Thursday. Online condolences are welcome at www.bayviewfuneral.com. 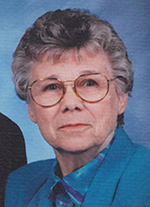 Alice Godeke was born Dec. 22, 1924, to her parents Jacob and Altje (Ravenhorst) Mondeel in Holland, Michigan. The family moved to Hollandale, where she grew up on the family farm and graduated from Westside School.

As a young adult she worked at a refrigeration plant in Albert Lea during World War II, and then at Associated Groceries in Hollandale after the war ended.

She loved music and she and her cousin, Alice Ravenhorst (DeBoer), entertained at social gatherings singing and playing their guitars.

Alice married Bernie Godeke on June 4, 1948. They made their home on a farm north of Hollandale. She was a homemaker and assisted on the family farm.

She was preceded in death by her husband, Bernie Godeke; grandsons Tim Godeke and Jake Martell; and brothers Gerrit and Arent Mondeel.