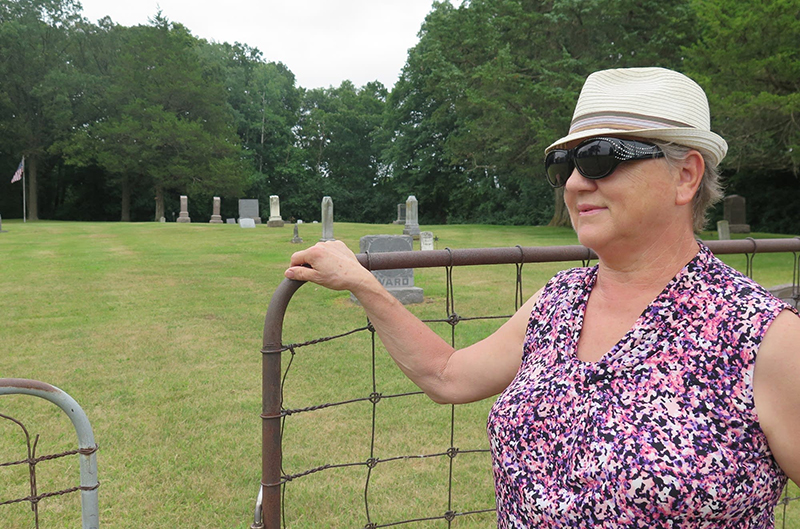 Janet Klug, niece of Elmer Kerestes, stands at the gate of Highland Cemetery in Holdingford, where her uncle will be buried. - Kirsti Marohn/MPR News

Growing up, Janet Klug knew her uncle, Elmer, died in World War II, but her family never talked about it.

On Dec. 7, 1941, 22-year-old Elmer T. Kerestes was a Navy fireman first class stationed aboard the USS Oklahoma in Pearl Harbor when the Japanese planes attacked.

Eight torpedoes struck the ship, and it quickly capsized. A total of 429 sailors and Marines aboard the Oklahoma lost their lives. Only the USS Arizona suffered more casualties.

When the remains of the crewmen were recovered, only 35 could be positively identified. The rest were buried in 46 plots at the National Memorial Cemetery of the Pacific in Honolulu.

For Kerestes family, there was no grave they could visit, no place to put a flag on Memorial Day in his honor.

Then in 2015, the U.S. Department of Defense ordered the remains of the unknown service members from the Oklahoma to be exhumed and analyzed.

Klug got a phone call from the Navy. If her uncle’s remains could be identified, would she want to know?

“Absolutely I would want to know,” Klug said.

Last March, Klug got another call. Using DNA evidence, the Navy had positively identified Kerestes’ remains. She still chokes up when she recounts the call.

“I just have to cry, because I think it’s just wonderful,” she said.

Kerestes’ remains were set to arrive Saturday in Holdingford, the central Minnesota town where he grew up and graduated from high school in 1938.

A procession will leave from a funeral home in Melrose in the morning and wind through the cities of Freeport, Albany, Avon and finally Holdingford. The city streets will be lined with firefighters, veterans and community members.

He will be buried with full military honors at Highland Cemetery in Holdingford, a city that has never forgotten Kerestes.

A soldiers’ shrine in the city bears four crosses honoring him and three other native sons who died in World War II. The local VFW post bears his name.

Mayor Sue Marstein said Kerestes’ homecoming is an important event for the city.

“These service people that go to the military and everything just give so much,” Marstein said. “It just brings home the fact that things don’t always end well, but we have end to this by him coming home.”

The Kerestes descendants are scattered around the country now, but planned to return to Holdingford on Saturday for the homecoming they’ve been waiting for for more than 75 years.

This isn’t the only return of a Minnesota veteran killed aboard the Oklahoma. Navy Fireman Third Class Glaydon Iverson was buried in Freeborn County on Memorial Day weekend.

Cory Vaske, Stearns County veterans services officer, said it’s still important to finally bring the veterans home, even if most of their immediate family are gone.

“To me it’s a principle,” Vaske said. “It’s part of that obligation to our soldiers, to our sailors that they answered the call. They’re going overseas to do what they’re being asked to do. And should they fall, that every reasonable effort will be made to bring them home.”

Rallying for hope together: Annual Relay for Life takes…