Austin woman was among the first to work on Spam line 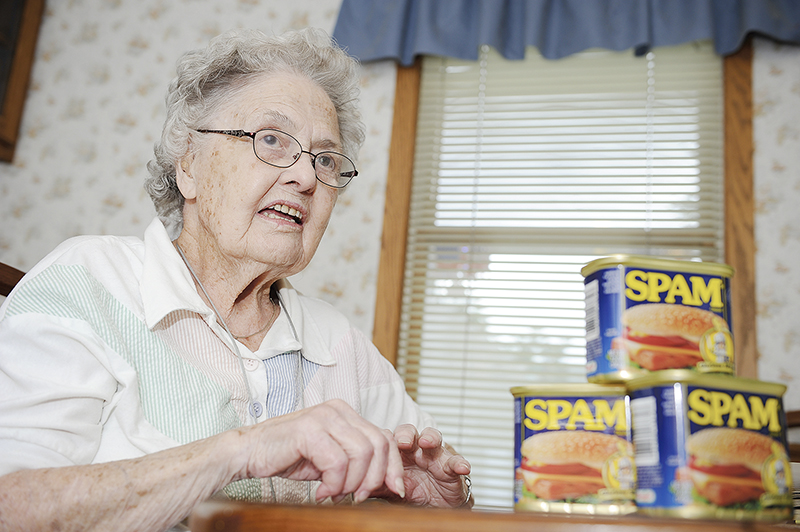 Mildred King remembers her time on the first Spam line, her time at Hormel and the meeting and marrying of her husband, Richard, while working at the plant. - Eric Johnson/Albert Lea Tribune

AUSTIN — Mildred “Millie” King had no idea that when she took a job on the Spam “short” line at Hormel Foods that what was housed in the cans she was weighing would change a culture.

“I needed a job,” said King, 97, probably one of the few workers left who was on hand for the maiden voyage of “the meat of many uses,” as its advertising slogan said in the early years.

She doesn’t recall why she ended up on the Spam line.

“I worked in a lot of areas” of the Hormel plant after her family moved to Austin. “I worked on the ham line for awhile,” sterilizing the cans, she said. “I even worked in the hog kill one day; bacon another day.”

She chatted about those days recently, sitting at her kitchen table in her Austin home with her daughter, Marlene Blaser. Although she will turn 98 later this year, her vitality makes you think of someone far younger. She reminisced about the times, eight decades gone, when Spam was brand-spanking new.

When Spam was created in 1937 — history tells us that Jay Hormel created the meat in order to use up shoulder portions of hogs — she worked regularly on the line, on the night shift, weighing the cans as they came off the line. There were three lines — two longer lines of six employees each, and her short line, with five.

“I would take a little out of a can if it was too much, or put some in,” to make the correct weight, she said. King’s entire family — her father, Frank Collette, as well as two older brothers and a sister — all worked at the plant, following a move from the Twin Cities. 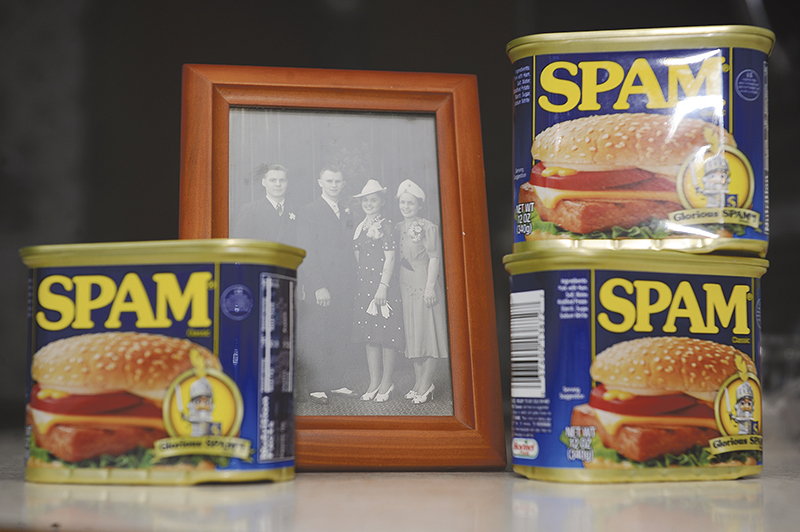 Mildred King is pictured with her husband, Richard (center), who she met during her time on the Spam line. – Eric Johnson/Albert Lea Tribune

Collette, a North Dakota native, worked at a meatpacking plant in the Cities at night and ran a grocery by day. He was a widower working hard to keep his family fed.

“He actually fell asleep walking home” from his plant job, King said. It was too much — they headed for Austin for new jobs and a new life. She was 17 when she landed her Hormel job in 1936.

King is quick to correct for the proper pronunciation of the company name.

“It’s HOR-mul,” she said, blaming the comedy duo of Burns and Allen for having led the country astray during early advertising commercials by mispronouncing it, “Hor-MEL.”

Hormel was a busy place, even then, King said. In the midst of the Great Depression, her family was happy to be working. Her dad became a cook in the Hormel cafeteria.

“I can remember helping him make sandwiches. They cost five cents,” she said, with a smile and a shake of her head.

The Spam lines, once they began, ran on both night and day shifts. King said she had no idea the impact Spam would make, or the critical importance the canned meat would have just a few years later, with the United States’ entry into World War II. The meat proved successful as rations since it traveled well.

“In those days, you didn’t worry about anything happening to you, even at that time of night,” she said.

The Spam line also held romantic importance to her: it was where she met her husband, Richard King. Like most, Richard King, a Braham native, had come to Austin to get a job at Hormel. He also worked the Spam line.

“At first, Mom couldn’t stand him,” said Blaser with a laugh.

One of her sisters wrote a family history and said of the match, “Initially, Millie detested Richard. She says ‘He irritated me and I wouldn’t even talk to him.’”

But Richard King eventually won her over and they were married in 1939, becoming parents to 10 children and enjoying over 40 years of married life. Richard King died in 1982.

The birth of Millie King’s first child meant she could no longer work at the plant, due to company policy, so she said goodbye. Her life got busy with raising children. The years of Spam gave way to years of raising a family and using her bounty of energy to volunteer for schools, church and other organizations. She was named Volunteer of the Year for her efforts.

As the 80th anniversary of Spam approaches, King reflects occasionally on those early years. Blaser frets that she cannot find the one photograph she knows of that shows King working on the line all those years ago, but made sure a few months ago to take her mom to the Spam museum and take her photo against the backdrop of Spam cans.

“I liked working the line; it was pretty easy work,” King said, adding she found the museum interesting.

Still, she doesn’t recall eating much Spam during that time, although it wasn’t because she disliked it, or kept her from serving it for meals at home.

“I probably just worked around it too much to want it,” she said, with a shrug and a laugh. 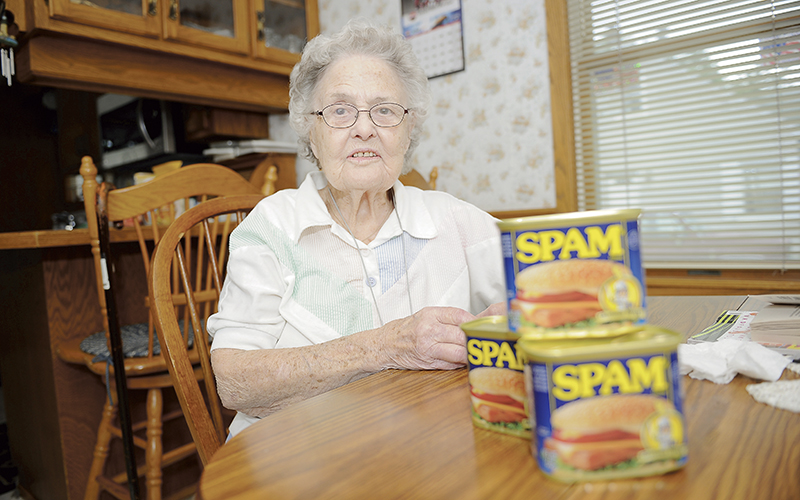