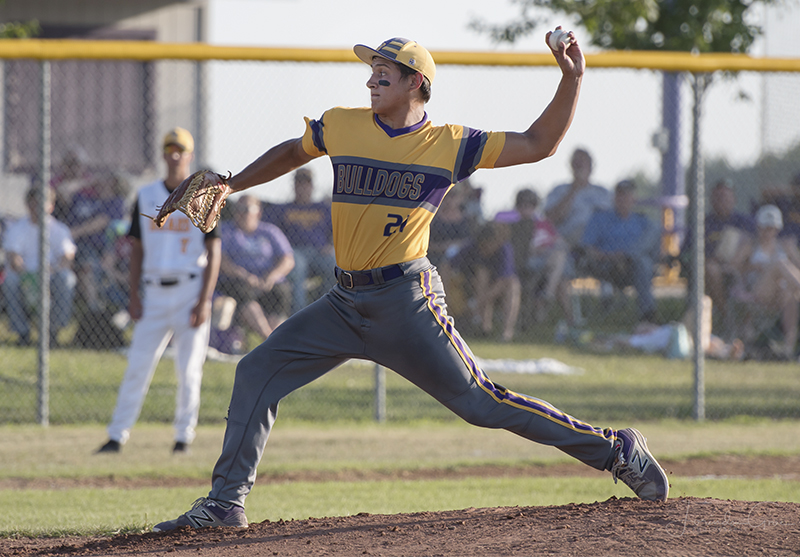 Senior Slade Sifuentes started the game pitching for Lake Mills. He recorded seven strikouts and alowed just three runs. The Bulldogs would go on to lose the game 9-3 to the Bears. - Lory Groe/For the Albert Lea Tribune.

LAKE MILLS — The Lake Mills baseball team saw its season come to an end Saturday night against Bishop-Garrigan, Algona. The Bulldogs took the game to extra innings, but fell in the eighth inning, losing to the Bears 9-3.

Senior Slade Sifuentes started on the mound for the Bulldogs. Sifuentes pitched six complete innings, striking out seven batters and giving up three runs. Senior Zach Throne started pitching in the seventh inning and pitched 1 2/3 innings. He struck out one batter and gave up zero runs.

A host of pitchers were brought in during the eighth inning for Lake Mills. Grant Fjelsted, Charlie Dugger, Luke Groe and Tyler Helgeson all made appearances on the mound for the Bulldogs. 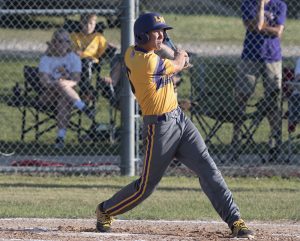 Senior Luke Groe gets the scoring started early for the Bulldogs. He hit a two-run home run in the bottom of the first inning. Lake Mills would end up losing the game to Bishop Garrigan, Algona 9-3. – Lory Groe/For the Albert Lea Tribune.

Lake Mills got the scoring started early on Saturday night. The first runs came after a two-run home run from Groe in the bottom of the first inning.

The Bears would score their first runs of the game in the fourth inning. Drake Buscherfeld and Andrew Meister scored for Bishop-Garrigan, Algona after an error by Lake Mills.

The Bears would take the lead in the very next inning after an RBI sacrifice fly from Grant Bucsherfeld brought in Drake Buscherfeld from third.

Lake Mills would tie the game back at three runs each in the bottom of the sixth inning. Some stellar base running from Sifuentes led to the tying run coming across for the Bulldogs.

It seemed like all the momentum was on the side of the Bulldogs. However, the Bears took it all back at the start of extra innings.

The Bears only recorded one hit in the eighth inning, but scored six runs. A series of walks and batters being hit by pitches put Bishop-Garrigan in a comfortable spot going into the bottom of the inning.

The Bulldogs did get two runners on base in the eighth, but the six-run deficit proved too much to overcome, ending the season for Lake Mills in the third round of the playoffs.

Lake Mills finished 14-14 on the season and lose four players to graduation as it heads into next season.