Memorial services will be at noon July 31 at St. Benedict’s Senior Community Chapel in St. Cloud. The Rev. Marlene Elmstrom will officiate. Visitation will be from 2 to 5 p.m. July 30 at Dingmann Funeral Care Chapel in Kimball and one half-hour prior to the service July 31 at St. Benedict’s Senior Community Chapel. Burial with military honors will take place a later date at Minnesota State Veterans Cemetery near Little Falls. 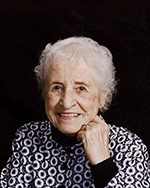 Charlene Becker was a remarkable woman who was born May 26, 1924, to Ross and Bertha (Verch) Smith in Janesville, Wisconsin. She grew up in Beloit, Wisconsin, where she also attended school. On her 19th birthday, Charlene joined the United States Navy. While she was stationed at Great Lakes Naval Training Station, she met Otto Becker who was also serving. They were married at the end of World War II on Aug. 17, 1946, in Beloit.

Charlene was always busy with work as an accountant for businesses in Albert Lea, along with their own business, Becker’s Sanitation. Her days were kept busy by being actively involved in Boys Scouts and Girl Scouts,  and as director of the summer YMCA camps and others as her children were growing up. She supported them in their school-related activities and was always on the sidelines of their sporting events. Charlene also gave this support to her grandchildren when she was with them. Charlene was giving of her time and was always a volunteer throughout her life.

She worked closely with the Freeborn Historical Society to teach children history of the past. She volunteered at national parks and monuments in Bandelier, New Mexico, as one of her favorites. Charlene also went to Liberia, Africa, to teach at a church school.

At the age of 64, Charlene graduated with honors from Minnesota State University with degrees in anthropology and gerontology. She then worked briefly with social services of Freeborn County and served on the regional Board of Aging. Her love of cultures and their ancient history made travel a priority. She spent time in 56 countries, with Turkey and Nepal being her favorites. Her greatest find was to identify the Lyle Woolly Mammoth when Lyle first unearthed part of it.

Charlene will be missed by her family and friends.

She is survived by her husband of over 70 years, Otto, of Kimball; son, James (Martha), of Danville, Vermont; daughter, Patricia (Russell) Robb, of Kimball; grandchildren and their spouses Shawn (Kerri Ann) Robb, Trevor (Emily) Becker and Lizzy (Brian) Bush; six great-grandchildren; one great-great-grandchild; and sister, Wanda Brohn, of Beloit.

There to greet Charlene in heaven were her parents Ross and Bertha; brother and sister-in-law Danny and Karen Smith; and brother-in-law, Lynn Brohn.