‘We need health care here, and we need it now’ 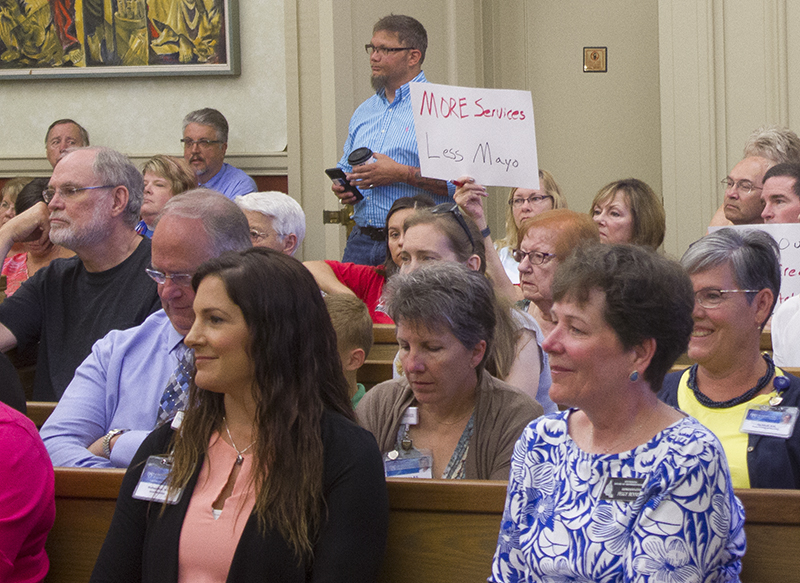 Freeborn County commissioners grilled Mayo Clinic officials on Tuesday in front of dozens of community members in a meeting that took place more than a month after the hospital system announced it was transitioning most inpatient services from Albert Lea to Austin.

Discussion during the board meeting came during a visit by Bobbie Gostout, vice president of Mayo Clinic and leader of Mayo Clinic Health System; and Mayo official Kris Johnson.

Freeborn County District 2 Commissioner Dan Belshan requested a new committee of elected officials be formed to listen to representatives of those affected by the transition and community members, and he asked for a six-month moratorium on the transition so there is a greater idea of the effects the transition will have on the community. He questioned the hospital’s transparency in the process, as well as the committee tasked with forming the transition plans.

Gostout said she was “saddened and distressed” that people were saying the hospital was being shut down. Using those terms hurts the community and is “disenginous,” and the Albert Lea campus will maintain elements of a hospital, she said

District 1 Commissioner Glen Mathiason and District 5 Commissioner Mike Lee said the transition will create a service gap in areas outside of Albert Lea.

Lee said a person who has suffered a stroke would have to be taken a greater distance for needed services.

“We need health care here and we need it now,” he said.

Lee cited a significant elderly population in the Albert Lea area as a factor in why a full-service hospital is needed in the community.

“We need more services here, not less,” he said.

Transitioning most inpatient services would have a worse effect on Albert Lea than Austin, Mathiason said.

Belshan said insurance rates are higher because of Mayo’s presence in the area.

“The hospital is costing you a lot of money — maybe you just want to give back to the community and get rid of this dog,” he said, drawing applause from the audience.

When asked by Belshan if Mayo Clinic would put a six-month moratorium on the transition process, Gostout said officials made a careful decision and were working their way through the implications of their decision. She said no business would want to operate on multi-million dollar operating losses.

Belshan requested Gostout bring the request before other Mayo Clinic officials in Rochester.

“We have to adapt in order to survive,” she said.

There are an average of one to two inpatient surgeries and one to two births per day on each campus,  she said. Of the more than 18,000 people in the Albert Lea area, about 500 people come into contact with the hospital each day, including about 40 people in the emergency room and 60 in urgent care — services that will both remain Albert Lea, she said.

When asked by District 4 Commissioner Chris Shoff if Mayo Clinic Health System’s decision could be walked back, Gostout said: “No, we’ve pounded through difficulties to come up with the best solution.”

When Shoff asked if the hospital system would sell the property to another entity, Gostout said the reasoning for the hospital’s decision to transition most inpatient services is a problem with rural health care — not Mayo Clinic — which drew a negative reaction from the audience.

Shoff took issue with the approach Mayo officials took in announcing the decision, saying county officials and departments should have been alerted to the plan before the decision to transition services was announced.

“It’s a little too late for that,” he said. “You made the decision on May 8. It wasn’t really publicized until the (Minnesota Nurses Association) sent out a letter, and then you did a hastily-called press conference the next day.”

Gostout said the announcement to transfer most inpatient services was not made until last month because the hospital wanted to minimize any confusion associated with the decision.

“I don’t know whether we got that right or not,” she said. “We still (have) things we can’t answer, because we are still strategizing and planning.”

She acknowledged that in attempting to avoid confusion, it was clear hospital officials had “missed the opportunity” to speak to the problems encountered in rural health care.

“And for that I am genuinely sorry,” she said.

Board Chairman Jim Nelson drew cheers from the audience when he questioned how the board could trust Mayo officials moving forward because of the mistakes hospital officials had made so far. Gostout said the hospital had provided a lack of information — not misinformation — during the process.

She said community leaders need to accentuate the positive parts of the transition to attract businesses to the region. The hospital system and community both want to make sure Albert Lea and Freeborn County are healthy and economically vibrant and share the desire to keep health care services close to home, she said.

The first of the changes in the transition is expected to be moving the intensive care unit in Albert Lea to Austin in October.

Inpatient surgeries are slated to move to Austin in January 2018, and the behavioral health center is expected to move from Austin to Albert Lea in 2019. Labor and delivery services are planned to be the last to relocate to Austin in late 2019 or early 2020.