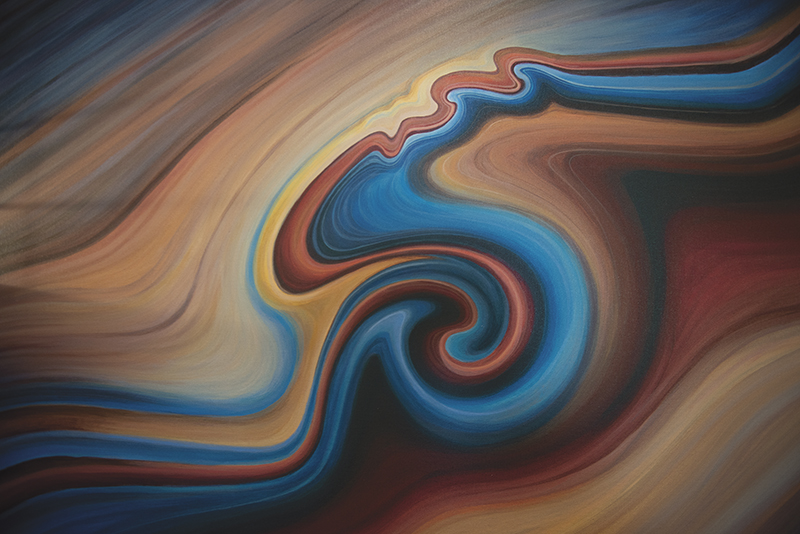 Lenz said the feedback he receives on some of his work depends on which style a person prefers: abstract or realism. - Colleen Harrison/Albert Lea Tribune

Man started with drawing, finds painting to be his greatest passion

As far back as Albert Lean David Lenz can remember, he has always had an interest in art.

He joked that his first canvases in life were the inside covers of books on the bottom bookshelf in his parent’s home, on which he drew trains and airplanes as a young child.

While in school as a child, he said, he had a teacher who used to get after him for always drawing spaceships and laser guns.

His interest in art continued into college when he attended Northwestern College in the Twin Cities for graphic design and landed his first job as a concept artist for a sci-fi game company — drawing the very thing his teacher discouraged him from doing years earlier. 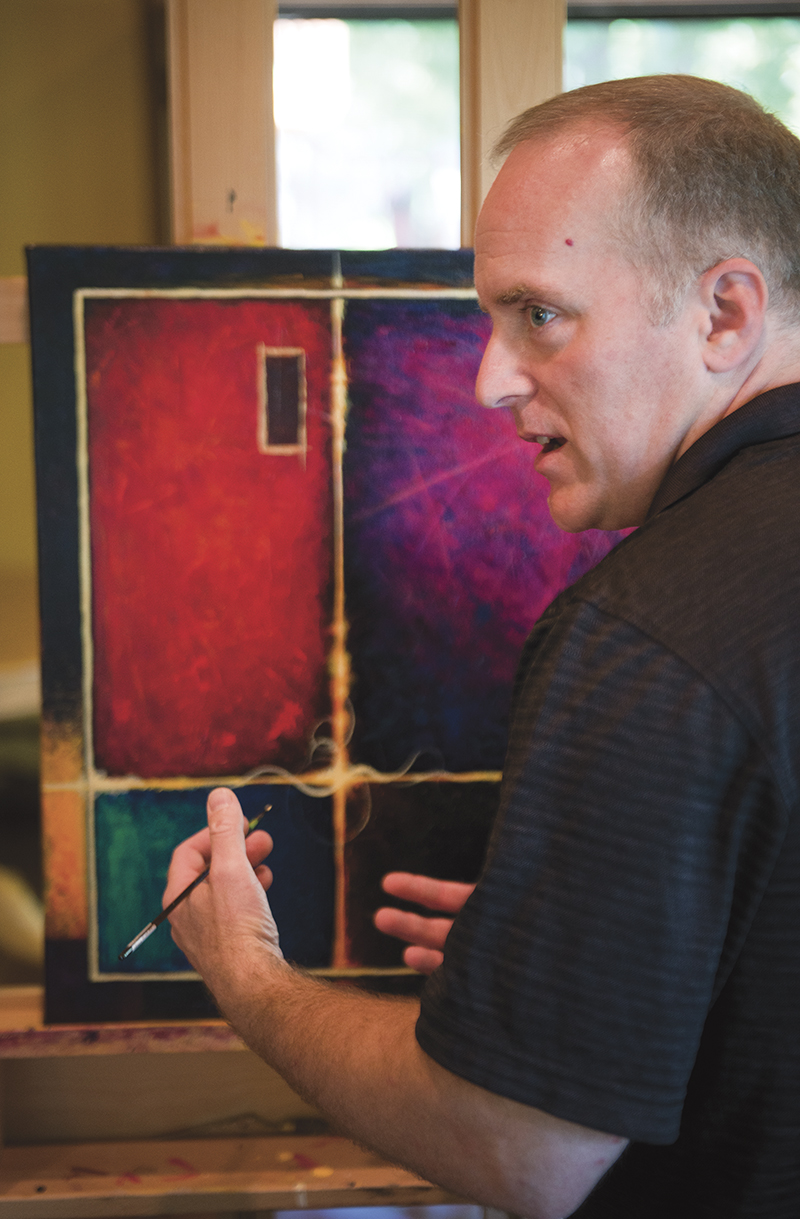 Lenz said he plans to have an open studio showing his work sometime in October. – Colleen Harrison/Albert Lea Tribune

Lenz said he worked in the Twin Cities for about 17 years before returning to Albert Lea 12 years ago.

Around that same time, his love for art expanded when he started painting.

“I was always an artist, but it was mostly pencil and whatnot,” he said. “My wife would say, ‘Why don’t you try painting?’ I would say I don’t have the patience to be a painter.”

After numerous trips to Grand Marais, he said something changed. 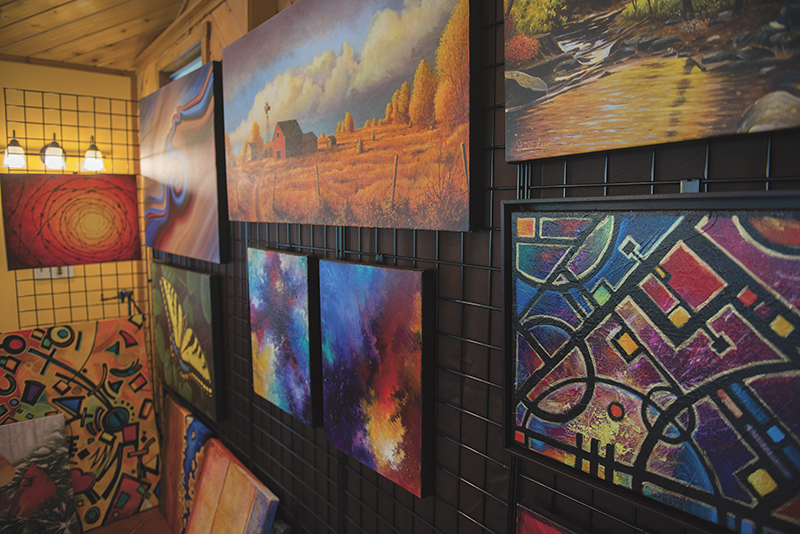 Lenz said he’s not afraid of color, and likes the colors in his paintings to be warm and vibrant. – Colleen Harrison/Albert Lea Tribune

He started as a realism painter — his most common subjects on the North Shore and in northern Minnesota.

He said after reaching a point where he realized his art wasn’t going to get better without taking any chances, he started painting abstract about four or five years ago. Abstract painting has helped him get a better understanding of the paint, as well as of different mediums and textures.

“I fell in love with doing that, too,” he said, noting he can go from making a wild abstract painting one day to a nature scene the next.

Lenz uses acrylic paint for his creations, which he said dries quickly — a plus when his two young children are around. He also incorporates different textures into his paintings with other materials.

He paints in a large studio of sorts in the back of his home with large windows that allow for lots of natural light to come into the room and prefers using bright colors in his work.

“I’m not afraid of color,” he said “I like to paint with warm, cheery color. Not that everything is smiles, but I like the warmth of the color.”

Lenz said he has enjoyed watching the reactions to his paintings, as some people prefer realism, while others prefer abstract art. He doesn’t care so much what the reaction is; he simply likes people having some sort of response to his work. 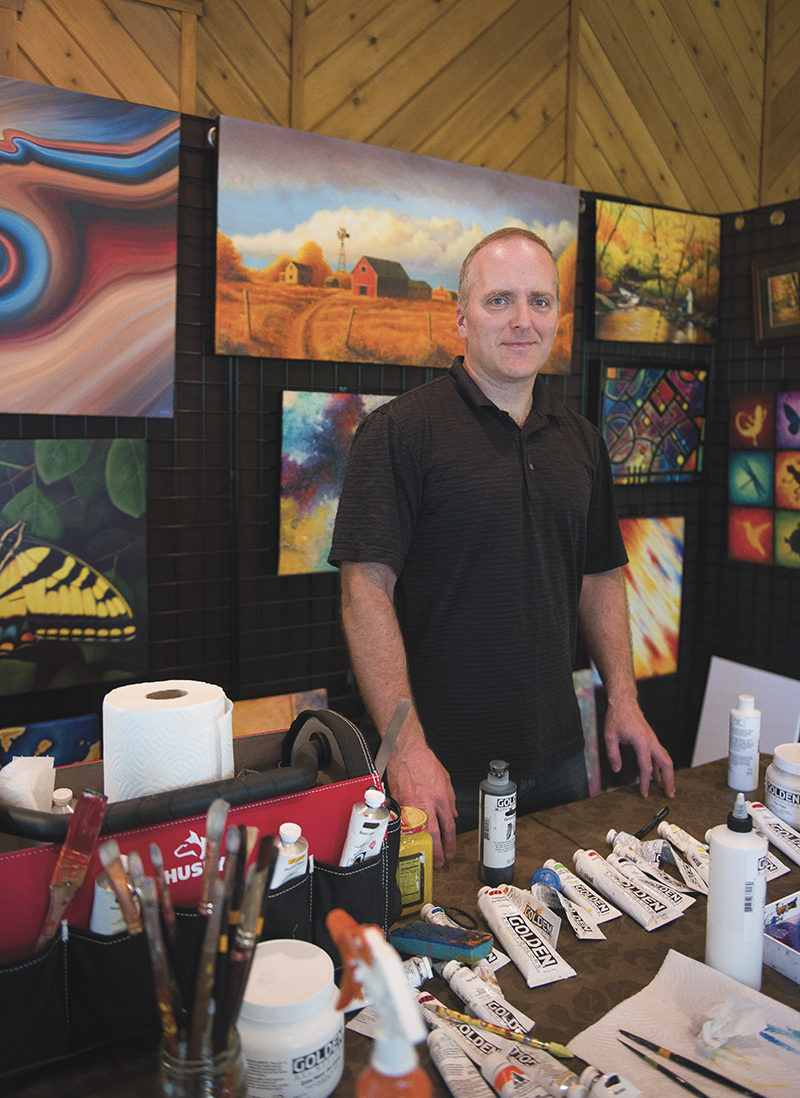 “The painting is a gift from God, and whether I make money off of it or not, I love doing it. I don’t really lose if I don’t sell.”

In addition to painting, he does some teaching and freelance graphic design work still.

He teaches classes at the Austin Art Center and The Meraki Studios in Albert Lea and is setting up classes with an area school district. He is looking to branch out into teaching homeschool groups as well.

He teaches everything from cartooning to sculpting and painting. He said he tries to give the children in his classes the tools they need to excel and then let them use their own creativity to take their work a step further.

After taking a break recently from painting, he has started up again in hopes of having an open studio show in early October based off of all the pieces he creates this summer.

Lenz said how long it takes him to create each piece varies, but noted it takes probably around 45 hours to complete each realism piece.

If people are interested in looking at Lenz’s artwork or having a piece commissioned for their home, they can contact him. His website is at davidseasel.com. 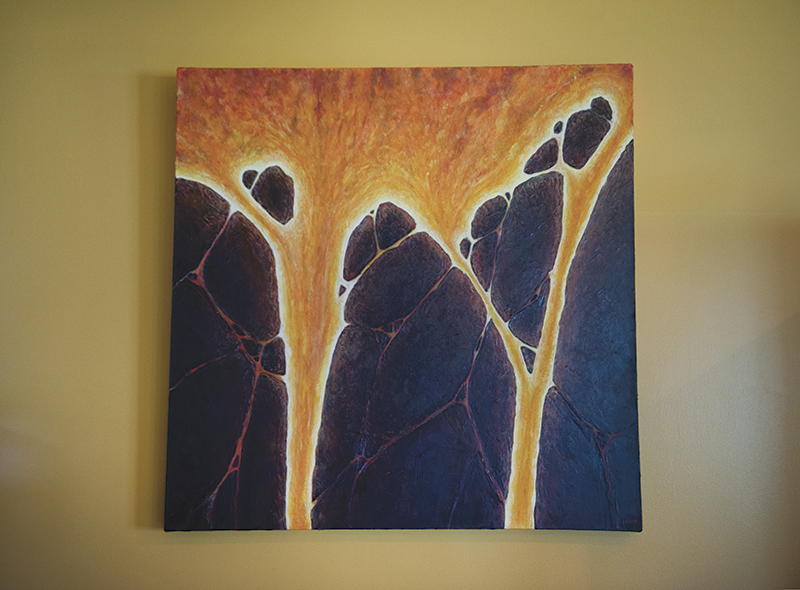 This piece, which Lenz views as depicting molten lava from a volcano, has resulted in different reactions from some of Lenz’s friends. One friend told him it made them feel angry when they looked at it. – Colleen Harrison/Albert Lea Tribune