Funeral services for Denny A. Brue will be at 2 p.m. Thursday at Grace Lutheran Church in Albert Lea. The Rev. Shane Koepke will officiate. Visitation will be from 4 to 7  p.m. Wednesday at Bonnerup Funeral Service in Albert Lea. Interment will be in Lakewood Cemetery in Albert Lea. Military honors will be accorded by the Albert Lea area veterans associations.

Dennis “Denny” Arlo Brue died peacefully surrounded by his family after a short, courageous battle with a rare renal cell cancer on Friday, June 30, 2017, at the Veterans Administration Hospital in Minneapolis. He was 72. 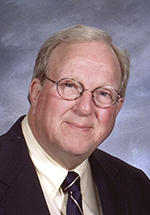 Denny was born June 21, 1945, to parents W. Donald and Cora (Holstad) Brue in Albert Lea. Denny graduated from Albert Lea High School, attended the University of Minnesota, served his country in the U.S. Army and earned his business degree at Mankato State University.

On Oct. 18, 1969, Denny married the love of his life, Roxann M. Sheveland, at Grace Lutheran Church in Albert Lea. He provided his family, country and whole community with his love and passion for Bruno’s Corn Dogs, which he owned and operated for 40 years. Denny was also the owner and operator of B&B Café for 24 years and owned Grandpa Brue’s Pancakes.

Denny was a member of the Veterans of Foreign Wars and was a classic car enthusiast. He was very involved in the Upper Midwest Region of the Classic Car Club of America, coordinating several car cruises in his ’31 Cadillac.

Spending time with his family and friends was important to him. He always put others first.

Dennis was a great husband, dad, grandpa and father-in-law who was well known by all those touched by his life. His legacy will live on through his family and will never be forgotten.

He was preceded in death by his parents and brother, Arden Brue.