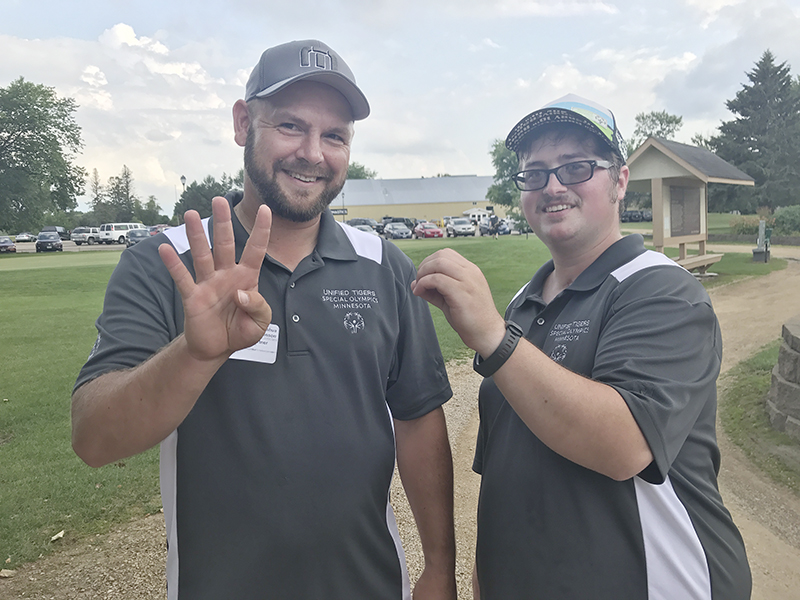 Josh Johnson, left, and Trent Nelson participated in the Area 10 Special Olympics golf tournament in Rochester on July 19. The duo earned a blue ribbon, scoring a two under par 40 through nine holes. - Provided

Trent Nelson of Alden and Josh Johnson of Freeborn played in the Area 10 Special Olympics golf tournament on July 19 at Hadley Creek Golf Center in Rochester. The duo shot the best score of their season, receiving a blue ribbon and finishing with a score of 40 in nine holes.

The teams consisted of two players — one with a handicap, the other without.

“It’s not easy,” Nelson said. “It’s alternate shot, so we take turns each hole, even on the drive we are told who has to hit the drive each hole.”

The team had been practicing on Thursday evenings to prepare for the event.

“We had to turn in three scores before we were able to compete in the actual tournament,” Nelson said. “The best scores we shot practicing were 45 to 47. So, we were really happy with the score of 40, which was two under par.”

Although the two men won the blue ribbon, they will not be able to compete at the state level due to conflicting golf events for Johnson.

“We picked a good day to play our best round of the year together,” Johnson said. “Trent and I were striping the golf ball all day and making putts.”

Johnson talked about what he thought the best part of the day was.

“Trent chipped it in on a par three and that was the best shot of the day for our group,” he said. “It helped us shoot a 40. It was a great way to finish our season.”