George Dean Taylor was born Dec. 25, 1940, in Austin, the son of Robert and Elizabeth (Guttormson) Taylor. He attended County School District 30 for eight years and then went to Blooming Prairie High School. 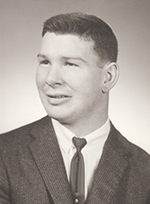 George worked at Red Oak Grove Creamery hauling milk. He also hauled milk for Albert Lea Creamery before he worked at the foundry for a few years. While working for a dairy farmer near Glenville, George was injured and had a leg amputated and no longer worked. He moved to Thorne Crest Senior Living Community a year and a half ago. While he was there, he enjoyed riding his four-wheeled scooter downtown and enjoyed his freedom.

George greatly enjoyed the outdoors, going to farm shows and driving through the country looking at the crops.

George is survived by his brother, William (Anne) Taylor; and many cousins.