Harold Eugene Wayne of Geneva passed away Tuesday, July 18, 2017, at St. Marys Hospital in Rochester. Harold, a lover of all sports, storyteller and candyman to all children, will be missed by many. 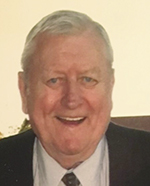 He attended college at St. Olaf in Northfield and the University of Minnesota. After college, he worked for the Star Tribune newspaper in Minneapolis and played on its amateur sports team. He met his wife, Patricia Mattix, there, and they married in 1953 and returned to Geneva, where they raised five children, Toni (Kirth) Smith, Laura Rogers, Bradley (Lynette) Wayne, Todd (Mary) Wayne and Paul (Jennifer) Wayne. He lived all his life in Geneva, working with his father, owning and operating Wayne Construction.

Harold was preceded in death by his parents and brother-in-law, Robert Murphy.