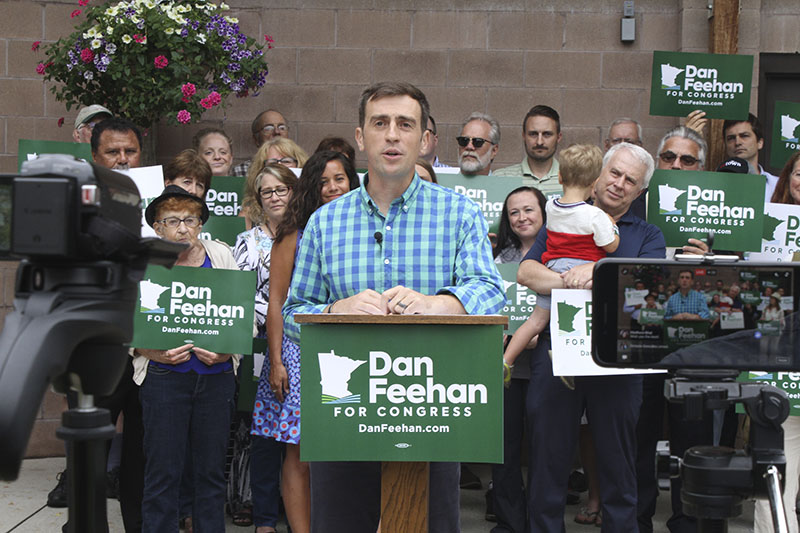 Dan Feehan of North Mankato announces his campaign for the U.S. House of Representatives at Sibley Park in Mankato. Provided

An Iraq War veteran and Minnesota native became the fifth DFLer to announce his candidacy for the 1st District Congressional District seat on Monday.

Dan Feehan, 34, made his announcement during a ceremony at Sibley Park in Mankato.

In the news conference streamed on Facebook Live, Feehan, a fifth-generation Minnesotan, said he wants everyone to have access to high-quality, affordable health care and education.

“My family has deep roots here,” he said.

Feehan said he is running for Congress to serve others and for his love of the country and Minnesota. He discussed his background of service in the military and education.

“I’m ready to use that knowledge on behalf of our community,” he said.

Feehan was an active duty member in the U.S. Army and the National Guard as an engineer officer, serving two combat tours during the Iraq War. He was awarded the Bronze Star Medal, the Army Commendation Medal with Valor and the Ranger Tab.

Feehan, who grew up in Red Wing and now lives in North Mankato, has a bachelor’s degree in international politics from Georgetown University and a master’s degree in public policy from Harvard University’s Kennedy School of Government. He and his wife, Amy, have two sons, Conor and Declan.

The other DFLers in the race so far are former state Sen. Vicki Jensen of Owatonna, John Austinson of Byron, Johnny Akzam of Rochester and Colin Minehart of Albert Lea.

According to the Minneapolis Star-Tribune, Republicans see a chance to wrest back the conservative-leaning district, which spans the southern tier of the state from the Wisconsin to the South Dakota border.