Memorial services for Jim Davis of Albert Lea will be at 1:30 p.m. Thursday at United Methodist Church in Albert Lea. The Rev. John Mitchem will officiate. Interment will be in Graceland Cemetery. Military honors will be accorded by Albert Lea veteran’s organizations. Visitation will be from 5 to 7 p.m. Wednesday at Bonnerup Funeral Service in Albert Lea, and one hour before the service at the church. 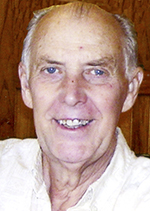 He was born on March 13, 1939, in Faribault, the son of Lee and Erma (Schuette) Davis. The family moved to Albert Lea and Jim graduated from Albert Lea High School.

Jim started work at Wilson & Co. and then was drafted into the U.S. Army in 1961, where he served until his honorable discharge in 1963.

He was united in marriage to Helen Peterson on Sept. 12, 1964. They made Albert Lea their home, and Jim returned to work at Wilson & Co./Farmland Foods until he retired in 1999 after 38 years with the company. He was a member of the American Legion, Eagles Club and United Methodist Church, where he enjoyed ushering and being a greeter. He took interest in cars and International Scouts. He enjoyed auctions, morning coffee at McDonald’s, traveling — especially trips to Europe — and dancing with Helen, his wife of 52 years.

He was preceded in death by his parents; two children in infancy; two nephews, Aaron Davis and Danny Baker; and father-in-law and mother-in-law Norris and Cora Peterson.

Jim’s life was based on hard work, love and care for his family and his faith. Blessed be his memory.